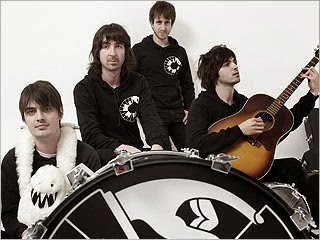 It's been a while since I dedicated any space to Phantom Planet, but then again, since they've gone into indefinite hibernation they've fallen off just about everybody's radar.  My PP fandom peaked circa their 2002 magnum opus, The Guest, and I even went so far as to join their fan club (BTW, I'm stilling sharing an exclusive release that I obtained through said club, Polaroid).  The 2004 self titled follow-up to The Guest was frankly a pisser, but I didn't completely write them off.  Good thing that, because they redeemed themselves with their fourth LP, Raise the Dead four years later.

What I'm presenting today is a mishmash of rarities and non-LP scree that spans the range of their career.  I purloined these 27 tracks from a myriad of sources, including now-defunct PP fan sites, file sharing platforms, and the like.  There are demos galore, live Weezer, Cheap Trick and Radiohead covers, b-sides, radio session material, and no less than three different versions of "The Happy Ending."  I'm opting not to reveal a tracklist, so you'll have to click on the supplied link to figure out the rest.  Enjoy (or not).

Oh man, that's the business right there. PP is Missing tore me open so perfectly my sophomore year of college (circa 2000). I listened to it on endless repeat in my beat up Volvo 240. Thanks much for this and everything else you post - it's always a treat.

looking fwd to this, thanks!

Could you re-uploaded please, link is not working