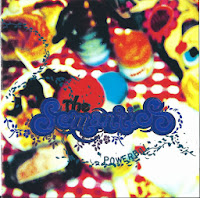 And it's guilty pleasure time.  Blame it all on Ben Folds, who in 1996 (thereabouts) brilliantly enlightened me via his own crew, Ben Folds Five that pure pop music didn't have to be gussied up in power-chords to be effective.  It was not long after my acquaintance with BFF, that I backtracked and boned up on the preceding decades' bounty of power-pop and the like, but my hankering for more music from the man himself never dissipated regardless of how recent it had been since he spun a new record my way.

As I trolled and turned over every stone online, I learned that Ben "The Voice" Folds had some involvement with an unknown Nashville outfit in the early '90s called The Semantics.  Though I never got confirmation on the specifics, it's been noted Folds played drums on some demos for the band, and was even asked to join the group, which he obviously declined.  In his place, the core duo of the Semantics, William Owsley and Millard Powers recruited Jody Spence.  Spence would pen some of the songs that comprised Powerbill, but left prior to it's recording.  In a phenomenal stroke of luck, it was none other than Zak Starkey, son of Ringo Starr who filled the drummer vacancy.  Having Starkey in the lineup was perhaps more of a boon to the band than it was to him.  Amazingly, on the trio's one and only LP, Powerbill, the percussion-work is hardly the draw, but I'll get to that in a few moments.

Geffen Records had the intention of  releasing Powerbill in 1993.  This failed to materialize, no doubt in part to the explosion of a certain contingent of aggro-rock bands of the era.  The album would remain on the shelf for three years until Geffen Japan in cooperation with Alfa International were prepared to throw their weight behind it.  Sadly, there wasn't much flexing behind that muscle, and as far as I'm able to determine, Powerbill was less than a hit in the Land of the Rising Sun.

Given what I'm wont to filter into my ear canals, The Semantics Powerbill is a sunny side-up anomaly for yours truly - bright, buoyant, extroverted, not to mention considerably polished and radio-ready.  The lure for me was quite simply the songs, all eleven of which when stitched together, or for that matter individually, make for a relentless hookfest.  Sonically, The Semantics suggest what a guitar version of Ben Folds Five might have amounted to, maybe with a pinch of Matthew Sweet power-pop smarts sprinkled in for good measure.  In 1993 Powerbill would have sounded wholly unremarkable, and to less discriminating ears today it likely still would.  I'm sure you'll come to your own conclusions.  I think it's pretty damn good.

Post-Powerbill, both Owsley and Powers would pursue solo endeavors, with the former finding a modicum of success with a self titled album for Sony in 1999, very much in line with the Semantics.  Millard Powers released a scarce solo album in 2001, but he later found success as a member of the Counting Crows starting in the mid '00s.  As I mentioned in a 2010 entry, Owsley tragically left the world that year of his own freewill.

Great, great album. I read about it at the time and thought it was something I should check out, but somehow got distracted and never bought it back then. I only came to it after the first Owsley CD hit.

Thanks a bunch - super cool find!

Picked this up after Owley's untimely death. Thanks for featuring it again - what a great album.

As much as I absolutely love this album, I like Millard Powers' solo album even more!

Interesting since Ben was in a Nashville band called Jody's Power Bill that got lots of airplay on 91 Rock at the time with the tune "Uncle Walter" which, of course, ended up on the first Ben Folds Five album.

Any chance of a re-up of this rarity?

Can you please re-up this one? TIA

No artwork because I can't find any.

I'm also puzzled why this appears to be in 320 when I'm almost positive I got it in 128 almost a decade ago.

But anyway, an cool addition to the Semantics album and the late Owsley ones.

I'll go looking for it if anyone is interested.

I would love to hear those demos if you find them. Thanks!

This really took some digging up. An old hard drive, dating from around 2009, slapped into an external reader. Much grinding and juddering...

Its labeled "The Semantics - One More Step" but appears to be Millard Powers solo album plus some other tracks in the Owsley/Powers/Semantics vein.

From a decade past I have no idea why I thought this was demos. Maybe I read that these were going to be the basis of a non existent second Semantics disc? And Powers Just put them out as a solo album?

I FOUND IT!!!
While I was waiting for the zip to upload I did some digging and found this -

This is where I originally got the download, now a long dead Rapidshare link. So thanks to Haper over at Pop Fair.

That's why I kind of thought it was demos.

Would appreciate it wildly if you (or someone) would put Powerbill back up (will trade for inside knowledge about Beauty Constant, if that's what it takes)

Would anyone have the Millard Powers album to re-upload? I've been unable to locate this rarity anywhere.