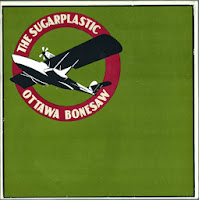 You may be a stranger to the Sugarplastic, but the Sugarplastic are no stranger to Wilfully Obscure, as this is the fifth entry I've dedicated to them, not counting compilation appearances.  Kiara Geller, Ben Eshbach, and various associates have been the esoteric yin to the proverbial yang of the traditional indie pop cognoscenti, off and on now for over twenty years, garnering comparisons from XTC to the Monochrome Set.  Due to relatively widespread availability, I have resisted sharing their five proper albums, but there's been a lot of extraneous material that's needed a proper nailing down, and that's where I've been laying down the hammer.  Case in point, their ultra scarce "Sheep" single, limited to a mere edition of 200 copies in 1993, which I've conveniently made available since '08.  Back than I foisted the "holy grail" meme to it, somehow forgetting the nearly as hard to come by Ottawa Bonesaw triple 7" on Pronto Records, also from '93.  That's one song apiece to each side of wax making for an even half dozen...with only two of those tracks appearing elsewhere.

If you're familiar with the Sugarplastic's Geffen offering from 1996, Bang, the Earth is Round you're likely to recognize "Polly Brown," spotted here in an early incarnation.  That selection, along with the five others, are indicative of the group's trademark mercurial charm, one that's fantastically weird, whimsical and erudite (though not necessarily all at once).  The title track is particularly advanced, with the Sugarplastic kicking their own oblique "pocket symphony" into high gear.  In addition to the ...Bonesaw box, I'm including the three songs they contributed to the M.E.G., L.A. Sampler compilation, also on Pronto Records.  The version of "Ottawa Bonesaw" is actually identical to the one on the box, but the fidelity is superior to my vinyl rip.  You'd also do well to check out "Jesus Doesn't Live Here Anymore," a smokin' little ditty that very well might make it into my hypothetical Sugarplastic Top-10 of all time.

Very Nice! Thank you so much!

I have some Sugarplastic you probably don't own. I'd like to share, but I don't see a way to email you.

Hey Beyourselvis. My email is in my user profile. Drop me a line, just keep any attachments small. Thanks.

Do you by any chance have the Kiara Gellar Bonus EP tracks that came with his album pre-order??

Hi Tim. No, I didn't even know that the bonus ep you mentioned even exists. Thanks for cluing me in though.

I still have my copy of this box set. Although I no longer have a turntable I will forever be hard pressed to give this up. Do you have any idea how many of these box sets were made?