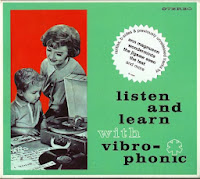 I was on the fence about this compilation when I critiqued it many years ago for a certain publication, and for what it's worth, after a decade plus, I'm barely more moved now than I was then.  The text of that review follows shortly, but I've got a few more cents to pitch in.

Vibro-Phonic Records was very much in cahoots with a Los Angeles power pop staple called the Jigsaw Seen (previously featured on W/O here), issuing no less than half a dozen albums and eps.  This leads me to believe the label may have been spearheaded by the Seen themselves, but as Herman Cain once famously uttered, I don't have any facts to back this up.  Vibro... was a fairly LA-centric label, as the inclusion of the Wondermints, Jupiter Affect, Wednesday Week and The Last would illustrate.  And speaking of The Last, yes this is that Last, although you would hardly guess this was the same psych-punk legends who gave us L.A. Explosion!, at least by their contribution here, "Perfect World."  One of the non-Southern Cali acts on this roster is Tube Top, WFYI are a big fave of mine.  The liners notes indicate that their "Keep it a Secret" is a Sid and Marty Krofft cover.  There are quite a few no-names here, the bulk of which didn't ring my proverbial bell.  Supposedly, Listen and Learn consists of unreleased and b-side material by everyone involved, however that was fourteen years ago, so some of these tracks may have surfaced elsewhere in the intervening years.  Anyway, my 1999 review is below, as well as a tracklist.

More of a compilation than a label sampler, Listen and Learn…showcases a wide-spectrum of new-ish pop artists.  L.A.’s beloved WONDERMINTS (who incidentally couple as BRIAN WILSON’S backing band) offer the self-explanatory “Rejected Beer Ad #1,” that Coors apparently passed up.  THE JIGSAW SEEN, TUBE TOP and THE JUPITER AFFECT (featuring the irrepressible MICHAEL QUERICO of PERMANENT GREEN LIGHT and THE THREE O’CLOCK) round out the rest of the “power pop” contingent here.  UNITED STATES OF EXISTENCE’S “L.E.S.3” is psyche inspired new wave, WEDNESDAY WEEK’S “Just My Size,” flirts with kitsch-pop, and THE LAST blend quivering vocals amidst a dub backdrop on “Perfect World.”

the Last is worth the price of admission alone!

Hi, any chance of a re-up on this one? THANKS