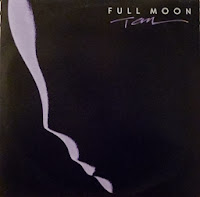 While not a total cold case, there are scant details to be had online regarding Full Moon Tan, a quintet who ostensibly called Mt. View, California homebase.  If anything, it's impossible to deny that FMT weren't an inch above milking the technology of the day to their most gratuitous advantage. This six song platter is rife with trendy, wave-pop nuances, that are almost enough to asphyxiate anyone in earshot with a skinny leather tie.  Singer Michael (no last name provided) exudes some discernible Sting-esque vocal inflections, without necessarily duplicating Sting's timbre, if that makes any sense.  Full Moon Tan were considerably more frivolous and tongue-in-cheek than the Police, placing them in league with the Brains and Donnie Iris.  If you're looking for a fun, and often catchy new wave record with an amateurish bent, you've hit the jackpot.

Spavid you've hit the 80's nail on the head on this one...kinda gives me an Oingo Boingo impression too...also there seems to be a smidgeon of a homage to the Police in terms of playing at the end of Aliens. I like it but don't tell anyone.

They opened up for Berlin at, then called, Marroitt’s Great America, in Santa Clara, CA. Maaaybe 1983?? That was my very first concert. No Money, No Chick, No Car was a fun song.

John michael is the lead singer...he is on facebook now. Hes in an irish band now. He likes frank sinatra too...

The lead singer Michael (I’ll keep his last name a secret for privacy) was the brother of one of the neighborhood moms when I was a kid. He was a big sports fan and would play footy and baseball with us in our “park” all the time. My favorite song of theirs was “Fernando Valenzuela” so I was hoping it would be here, but alas, no sign of it.