A Flock of Seagulls "Space Age Love Song" - An appreciation of, with 15 interpretations. 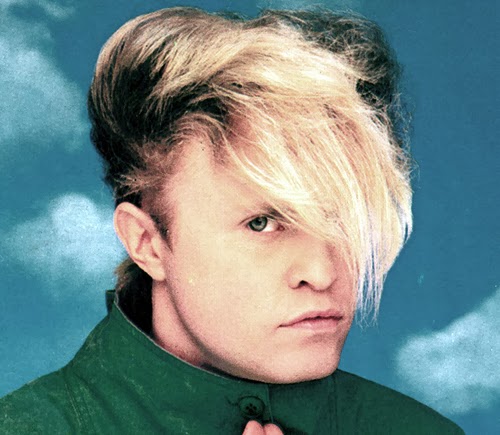 Here we go again, with yet another exercise in redundancy.  Previously on these pages I've featured self-curated compilations of every cover version I could find of a couple of my all-time favorite songs, specifically Eddie and the Hot Rods's "Do Anything You Wanna Do" and Brian Eno's "Needles in the Camel's Eye."  I find "Space Age Love Song" to be equally worthy and enduring, and in many respects more sonically dazzling than the aforementioned tunes, although I hardly set this series up as a competition.  Everybody is familiar with A Flock of Seagulls signature hit, "I Ran (So Far Away)," but fewer people have encountered the 1982 follow-up single, "Space Age Love Song."  Chart-wise, it only peaked at #30 in the States, thus relegating the Seagulls to one-hit-wonder purgatory, yet if you've actually listened to the tune you know just as well as I do that it's superior to "I Ran." 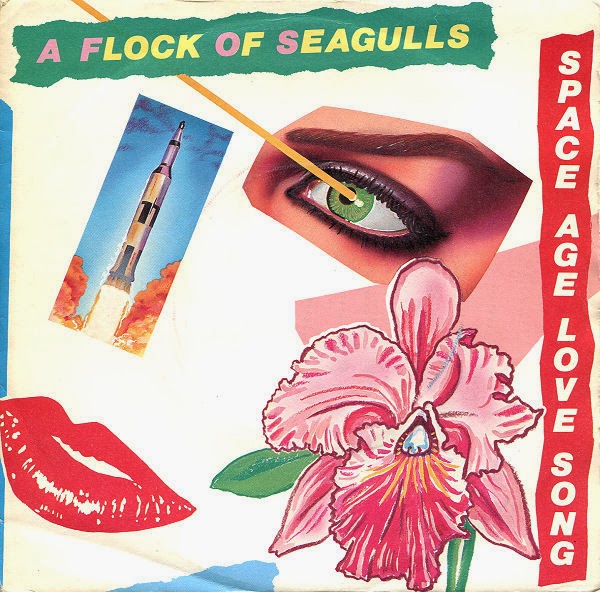 It's been noted that the lyrical content of many AFoS compositions don't elaborate much further than the sum total of the song title.  Technically that's not applicable here, as the phrase "space age love song" or any variation thereof, isn't once uttered by the cleverly coiffed Michael Score.  In fact, between it's merged verse/chorus, "SALS" only offers about six different lines total - but therein lies the beauty.  As underwritten as the piece is, it isn't particularly noticeable thanks to a sublime and alluring instrumental feast of swarming synths and even more prominent echo-laden guitar.  This amalgam is nothing short of heady, and words hardly do justice in describing it, so with that, I'm presenting fifteen separate readings of "Space Age..." served up by the likes of such fairly unknown quantities as Brief Candles, Tennis System, Teeel, Dark Distant Spaces, The Bomb, Lazlo Bane, Electric Blankets, No Motiv, and The Molly Ringwalds.  For good measure, I'm tossing in a KMFDM remix, and a live rendering of the song in question by a notable Oklahoma based combo.  To top it off is a re-recording of "Space Age..." by the originators themselves.

As for Mike Score's "waterfall" hairdo that unintentionally immortalized A Flock of Seagulls (not to mention the very connotation of "new wave" itself) our man's scalp no longer contains the adequate number of follicles to replicate it, sad to say...though I do think he's still touring.  The band's '80s catalog has recently been reissued by Cherry Red.

That's a pretty harsh definition of "one-hit wonder". Not only is 30 a perfectly acceptable chart placing (both US and UK charts n the 80s would have been judged as "Top 40") but "Space Age Love Song" wasn't even the Flock's second-best attempt.

"Wishing (If I had a photograph of you") made #26 in the US charts in 1983. It was also the band's biggest UK hit, considerably outstripping "I Ran".

I love the fact that you're not too cool to admit you love a Flock of Seagulls song.

I say "one hit wonder" to reflect the general attitude of the fickle mainstream, not so much my own. That's how they're regarded in the States (try hearing something other than "I Ran" on terrestrial radio by FOS). But true, I didn't take into consideration their chart success elsewhere.

No Chuck, I'm definitely not too cool to admit my awe of "SALS."

I effin LOVE this song.... great work gathering these tracks. Already had a few. Thanks!

As much as I've enjoyed your blog throughout the year, THIS is my vote for post of the year. Great compilation, thanks again!

I can't tell you how much grief I've gotten over the years due to my undying love for AFOS. But I weathered it all with a smile on my face and a synth pop song in my heart. At a time in my young life when I was musically and personally adrift, the MTV World Premiere of the "Wishing" video blew my tiny mind, made me a life-long fan, and informed my musical tastes for a decade or more. And I can't believe that I've found another person who also thinks that SALS is better than I Ran. Don't get me wrong, "I Ran" is awesome and an unarguable classic, but SALS was always my preferred single. And the video featured the debut of the true, iconic seagull/waterfall hairdo. Damn! Now I have to go fire up iTunes and listen to everything.

Hi
The link is dead, it is possible a fresh one?
Thanks in advance
:-)