The Recoup issue one - a brief overview. 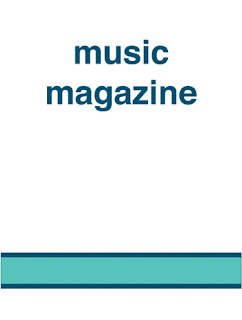 As greedy and rapaciously profit driven as major record labels are, it's hard to believe that even Capitol Records would have a problem with Semisonic only moving a million and a half units of their 1998 breakout album, Feeling Strangely Fine.  From the same source that disclosed this curiosity, I was also enlightened with the fact that would-be emo sensations Texas is The Reason threw in the towel just as they were about to ink a deal with Capitol as well.  And on a relatively unrelated note, imagine my amazement when I learned of a young teenage boy in Texas, circa the Reagan-era, who held Yoko Ono and Ravi Shankar on a far steeper pedestal than Michael Jackson and Def Leppard.

So where did all this seemingly random musical minutia emanate from?  A slender but often engrossing zine that just made it's debut last month (yes that's the cover to your left).  Curated by an alumni of the more established Big Takeover magazine the digest-sized The Recoup is entirely reader funded and as such, is ad-free.  Not one to be hemmed to album cycles, genres or even current artists, The Recoup is the creation of an intense music aficionado, who's not afraid to assemble a compendium of articles/interviews with such disparate names as the Naked Eyes, Apple Records footnotes Lon and Derrek Van Eaton, the aforementioned Texas is the Reason, and Jacob Slichter of Semisonic.  As is par for the course of music periodicals, a bevy of album reviews are also featured, with an emphasis on reissues like The Breeders deluxe redux of Last Splash, and titles by the Durutti Column, Codeine, Everything But the Girl, and a dozen or so more.  To close the magazine out, the tables are turned with the editor himself being interviewed by the author (Lisa Carver) of a Yoko Ono book, Reaching Out With No Hands, regarding his self-proclaimed martyrdom for the fifth Beatle, which took hold while he was still in grade school.

I've assembled a small MP3 mix of music pertaining to some of the artists discussed within, including rare studio and live material.  A hard copy of The Recoup is available on Etsy, and a website has been set up here where you can view some sample pages.

Ah, Joseph's mag is finally ready to take its bow. Good on 'im.