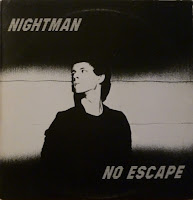 You could say that any friend of Tommy Keene is a friend of mine.  What aroused my interest in Nightman, was drummer Doug Tull, who I learned was formally enlisted in the greater D.C. area Razz in the late '70s, a group which prominently featured a pre-solo Tommy Keene in it's lineup.  In fact, the label that released No Escape, Limp Records, was also home to the Razz.  For a record of it's caliber, I'm damn near shocked that No Escape hasn't been reissued, or found it's way into the sharity blogosphere.  It will come as no surprise to most of you that Nightman slotted nicely into the power-pop side of the tracks.  Think more Knack than say, Shoes.  There are some occasionally routine moments here, but the truly inspired selections (e.g. "Waiting" and "Headline") glisten superbly.  The band's ska parody, "Skanky" would have been better left on the shelf, however.  As it would turn out, Nightman generated a rising star in bassist Ted Niceley, who would subsequently launch a prolific career as an in-demand record producer.

Hi, this is a good obscurity. I bought it years ago since it's from Maryland. They took down my Vinyl Obscurity blog which is a shame, lots of content gone. Anyway, still following though. Thinking about starting a youtube VC channel.

Was very sorry to see V/O taken down. A big favorite of mine. Best of luck with any future endeavors. Drop me an email sometime (located in my profile).

Love this! This is why I come here almost everyday. Thanks.

Hey Man, your site is awesome. I stumbled over it the other night looking for this very album and have since downloaded almost 40 other albums. I am so appreciative for all the work it must take to create and maintain such a site. I've got so much more stuff to listen to because of you and, for me, that's the funnest thing I can do.

One unfortunate thing, although I will be just fine one way or the other, is that the link to this album, the one that first introduced me to you, appears to be expired. It's odd to me being that you updated the link not more than 3 months ago, but I have tried it a few times with the same outcome.

Again, thanks for your hard work and for your excellent taste in music and for having the attitude that music of all kinds is best when shared and enjoyed by as many as possible and that to deny someone the opportunity to hear even one kick ass song is a fucked up thing to do.

The link has been updated. Thanks for the kind words.

Hi Spavid. Thanks for the super quick re-up on this album. I'm still filtering through your posts and am psyched at all the sweet shit I've already grabbed. A really nice surprise was the Marsupials album. I used to see them somewhat often in Los Angeles back in the '80s and didn't even know they had put an album out! Thanks again, please know that your work is appreciated.

please could you re-up this one?

Late to the party here - but what a great record! Thanks for posting