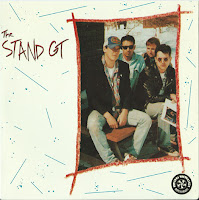 This 45 turned out to be a precursor to the much more exhaustive Nils tribute project, namely the Scratches and Needles various artists LP that was issued in 1998.   The Stand GT turn in a very faithful reading of the band's undeniable punk-pop classic, "When Love Puts on a Sad Face."  While that tune carried over to the aforementioned Scratches and Needles, Potbelly's offbeat rendering of "Scratches and Needles" was left to languish on this split single, and by and large, I understand why.  Stretching what was originally a less-than three minute song into a protracted seven minute jam, saps much of the energy out of it, but when the needle finally lifts from the groove, the general aesthetic of "Scratches..." loosely prevails. 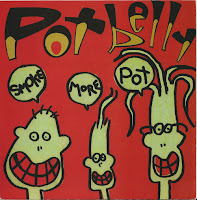 Truth be told, I'm posting this one just as much for the sleeve art as the music, with each band taking to task spot-on parodies of two classic Nils albums sleeve.  The Scratches and Needles tribute comp is available from Amazon and iTunes, while original copies of this 7" may still be obtainable through Mag Wheel Records mailorder.

A. Potbelly - Scratches and Needles
AA. The Stand GT - When Loves Puts on a Sad Face