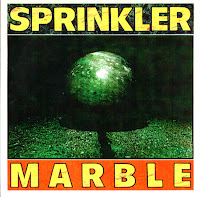 Of all the '90s Portland, OR bands that never quite "made it" - Heatmiser, Pond, Hazel, Skiploader, and Crackerbash, I always thought the case of Sprinkler was the most unfortunate.  Not because anyone in the group died tragically or anything, rather when I consider that overlooked vanguard, Sprinkler had the leanest discography to show for it, and even sadder, the most potential.  Fans of this Oregonian quartet are immensely hard to come by.  In fact, in almost twenty years of admiration of Sprinkler I have yet to meet anyone with an affinity, or for that matter just plain familiarization with their name and/or music.   In addition to these singles, they cut a phenomenal album for Sub Pop Records in 1992, More Boy, Less Friend.  What that record lacked in terms of a desperately needed lyric sheet, it made up for in pummeling riffs, brooding melancholia, and songs to die for.  Accept no imitations.  As for the singles presented here, "Marble" b/w a pre-More Boy incarnation of "Landlord" saw the light of day on Tim Kerr Records, shortly before the album.  Love the swooping guitar line running through "Landlord," and "Marble" is even more melodic and vital.  Before splitting up, they cut one last record for Sub Pop, tracks three and four listed below.  That 45 was also available as a European import with two extra tracks though I have yet to come across a copy.  If you like what you're about to hear, More Boy, Less Friend is still relatively findable, digitally and otherwise. 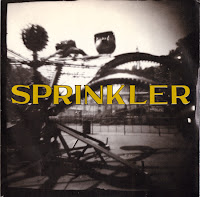 Post-Sprinkler, singer Chris Slusarenko went on to front the similarly unheard of but satisfying Svelt.  More recently, Chris has dabbled in music journalism, and has been a longtime collaborator with Robert Pollard, involved in such post-GBV projects as Boston Spaceships and the Takeovers.

While living in the Phoenix wastelands, the newspaper I worked at received a promo copy of More Boy, Less Friend. I moved to Portland 2 months later. Nuff said.

Thanks for the link Chris, and the anecdote.

Consider me one of the few, and possibly the only one from Dundee...