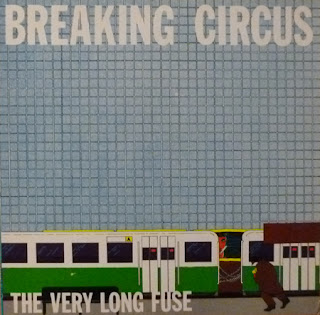 The cry went out roughly a week ago when one of our fellow music bloggers requested some difficult-ish to locate vinyl from a handful of Midwest-corridor, indie castaways from the '80s, one of whom was none other than Breaking Circus.  I've long owned copies of their catalog: The Very Long Fuse, Smokers' Paradise, and their only legitimate full length, The Ice Machine, but other net scribes had pretty much beaten me to the punch in making these available.  Going back to that request I initially mentioned, it was brought to my attention that heretofore Breaking Circus had only been accorded the MP3 treatment, and given that their records never saw the light of day on CD (and are likely to stay that way) someone with relatively clean vinyl copies might be compelled to provide the world at large with lossless (aka: FLAC) versions of said back catalog.  I'm happy to announce that I'm here to fill that void, starting with their 1985 debut, The Very Long Fuse.

For a band who never made it into the digital era, Breaking Circus' vital stats have been crunched on several websites and blogs.  The short story is that ex-hardcore guy Steve Björklund, formally of Strike Under and the even lesser noted Terminal Beach, branched out into the post-punk arena with the Circus, garnering a modicum of notoriety before the curtain closed in the late 1980s.  Taking root in Chicago, before eventually transplanting to Minneapolis, Breaking Circus indigenous forte combined Björklund's deadpan vox with offbeat topical material, and driving, metronome-perfect delivery (due in no small part to a trusty drum machine).  Their could've/should've been "signature" song was a no brainer - "Driving the Dynamite Truck," but it doesn't materialize on any of their proper albums, rather a 1986 compilation that is going to remain unnamed, at least on these pages.  So marvelous is that song, I'm including it as a bonus here, and although Björklund doesn't sing so much as talk, "...Dynamite Truck" features a deliriously drony yet melodic guitar lead that is likely to make a lifelong impact, if you're as lucky as me that is.  Remember, this rip is in FLAC, so the files sizes are about three/four times the size of the 256 kbps MP3s I normally share, but they should work with most audio playback applications.  More Breaking Circus to follow...

01. Precision
02. (Knife in the) Marathon
03. Lady in the Lake
04. Soul of Japan
05. The Imperial Clawmaster's Theme
06. Monsters Sanctuary
07. Christian Soldiers
08. Morning
plus: Driving the Dynamite Truck

Awesome band, one of my absolute all-time favorites

why thank you (from the man who made that casting call you reference, your Analog Loyalist)!

No problem. Breaking Circus aren't one of my top shelf faves, but they are fascinating. "Driving the Dynamite Truck" is immense. Have to wonder how they pulled that song off live.