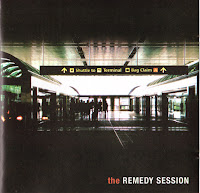 I thought I'd use the review I did for Big Takeover magazine (I wanna say in 2002/03) as my write up for Remedy Session's lone album.  For some reason I seem to sound much more eloquent back then than I possibly could today if I were to start from scratch.  This co-ed Florida trio has been defunct for several years.  Too bad, because evidenced by these ten songs they had talent to burn.  Was looking forward to seeing them in Buffalo around the time of this disk's release but the gig was canceled.  More text can be read in a lengthy feature article archived at the Broward/Palm Beach New Times website.  On to the review:

It wouldn’t be unreasonable to dismiss Ft. Lauderdale’s Remedy Session as the logical offspring of the ever-expanding crop of current emo/pop-punk aggregations, some of whom have already graduated to household-name status.  It’s also pretty much indisputable that the Session haven’t been immune to the cross-pollination of these two genres, particularly acts like Hey Mercedes, Anniversary, and the now defunct Jejune.  In fact this trio can also claim male and female vocalists suspiciously similar to the Anniversary’s set-up. So what makes The Remedy Session just as effective if not more so?  Chalk this up to a subtly cerebral bent with a keen awareness of post-hardcore originators like Jawbox and Friction.  A-plus harmonies, and a roiling mid-tempo thrust splendidly propel cuts like “The Final Failure” and “All Circuits Down“ to a higher plateau than the more pedantic output of their contemporaries.  Simply put, The Remedy Session stand out.

Nice! Do you still write for Big Takeover. BT is the best indie mag on the market, bar none.

ah ha! i thought so... big takeover writers can tell each other apart in a crowd... you can find me in the back pages....

hi could you tell me who sings this song?
http://www.youtube.com/watch?v=CUoROiD3PwM

Did a lyric search for the song in the YouTube link. It's called "Under Surveillance" by Oppenheimer Analysis:

thank you very much friend if you've been looking if apologizes for any inconvenience. can you tell me who sings this song please if friend if:

Not sure if this will be seen but can I can get a re-up? I'm working on a mix, and this might be what I need! Thanks!