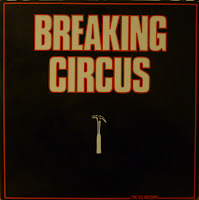 Last week I was inspired by the request of another blogger to rip Breaking Circus' 1985 ep The Very Long Fuse to the lossless FLAC format as opposed to my usual MP3s.  Today I present submit to you the remainder of the B/C oeuvre, starting with their only bona fide full length, The Ice Machine, a Homestead Records product dating back a quarter century ago.  Pound for pound, I regard The Very Long Fuse as their strongest record, but Ice Machine comes in at a very, very close second, featuring some of their most pummeling selections, namely "Took a Hammering" and "Swept Blood," both of which are profoundly induced with a solid dose of Big Black.  Something tells me that Steve Björklund and Co. had a few collective go arounds with Atomizer before tracking this baby. 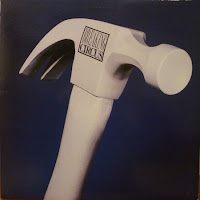 The Circus' third and final 12" Smokers' Paradise trails it's two predecessors by a good distance, but is markedly more diverse, with prominent keyboard presence on the title cut, and pop flirtations elsewhere.  I have to concede that "Eat Lead" and "Emperor Calvin" are as hard boiled as anything in their catalog.
I'm a bit confused regarding Breaking Circus' final salvo, a 1989 45 which is essentially a Björklund solo venture featuring electro-pop renderings of Naked Raygun's "Home of the Brave," and a UK Subs song, "Warhead" on the b-side.  My confusion lies in the fact that supposedly it came bundled with a fanzine with no picture sleeve, but my copy has an accompanying sleeve, a bright yellow one at that (depicted below).  Was my version only available separately from the zine?  No bigee.  I got mine, and that's what counts.  Anyway, enjoy the "hammer" records in glorious, FLAC-o-phonic sound.' 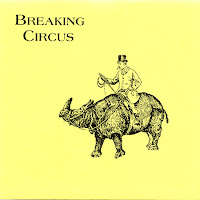 My copy came with the Fanzine. Never saw the version you show before. I loved this band. I am surprized that Steve Björklund did not make much more music after this. He had a website or facebook with some demos which may still be around. But unless someone knows differently, I think this is the end of the line for him as a recording artist.

Just went to his Myspace page where he has a few tracks up, including a rather hideous techo version of "Driving the Dynamite Truck."

Yeah, he's got a new project, High Value Target with the drummer from The Effigies. They've got a 12" pressed.

Wonder if they're any good. Have you heard them Brushback?

I've heard it, and it's amazing how Steve's singing voice hasn't changed a bit. You know it's him instantly.

Bjorklund was also in Ballon Guy in the early 90's for a brief period. They were not my cup o' tea so I don't know many of the details. I don't think he's on any recordings. He had some very serious health issues in the mid-90's but it seems like he must be alright now.

Breaking Circus and Rifle Sport eventually shared a couple members, including Todd Trainer, one of my favorite drummers, who is now in some band called Shellac.

I owned a Balloon Guy 7" back in the mid-90's (it was iffy), but yeah, I never saw Steve's name on the back of any of their records even though I kept looking.

Yeah, I'd say "iffy" kinda describes Balloon Guy. Incidentally, Minneapolis had a ton of great and now-obscure bands in mid/late-80's. I'd recommend both the ragged garage rock of the Baby Astronauts LP and the crunchy pop of Dragnet. Of course, Halo of Flies were great and not-so-obscure. Rifle Sport's post-punk was a bit of an acquired taste vocally, but once acquired they were quite awesome. Run Westy Run had a somewhat forgotten great second wind in the early nineties before collapsing in a heap.

For some indiscernible reason I was scared off by Balloon Guy. Maybe because when I was a youngster I was intimidated by folks (i.e. clowns) who made balloon animals. Mine was an awkward childhood.

Nice to meet all of you. I am happy after reading your article. It is very nice article.Really it is a great site which offer free printable recipe cards products. I had searching this type of various fancy flourishes recipe cards. Thanks for informing.

I read your post "Breaking Circus - The Ice Machine (1986).. . Really, it's an interesting post by you.And i want that you write the more informative article about Ice Machine for all.

congratulations guys, quality information you have given!!! shave ice machine

Any chance you could re-up these? Just found my old vinyl too warped to play...