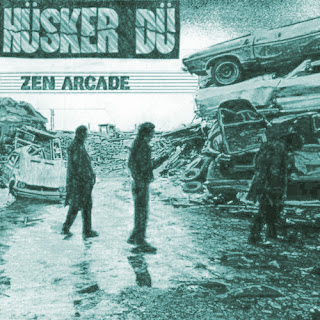 Happy Chanukah, Merry Christmas, and Happy New Year.  Now that I've covered all the bases, time to present you with my end of year, BFD upload, with 2011's entry coming in the form of a three disk boot of Hüsker Dü's seminal, 1984 tour-de-force, double LP, Zen Arcade....and a bootleg live CD.  Save for a couple of tribute albums, I've featured next to no Hüsker material on Wilfully Obscure, due in part to SST and WB for keeping their catalog in print, and to a handful of bloggers who've assembled b-sides compilations.  Nonetheless, I firmly believe that music fans could do no better in the '80s than this storied Minneapolis power trio, who fused riff-roaring punk with some of the finest and most innovative melodic structures ever.  I hold the opinion that Bob Mould, Grant Hart, and Greg Norton's halcyon era commenced in earnest with the release of 1983's Metal Circus ep.  Back then, as the case is still largely today, it takes a full fledged album to really reign in ears en masse.  Though Hüsker Dü's first proper studio album, Everything Falls Apart dropped in 1982, Zen Arcade was the record that jettisoned the band into the limelight, for lack of a better word.

There is no universal agreement as to which Hüsker record is the most representative, or for that matter, timeless, but the trio's most ambitious recordings ever committed to vinyl fall squarely in the realm of this auspicious concept album.  Those "concepts," which are somewhat malleable in interpretation, involves a pained childhood, teen angst, and runaway scenarios among other related themes.  What sprang out in that angst-laden aftermath was some of Hüsker Dü's most sophisticated and cathartic song arrangements, setting up something of a template for Zen Arcade's successor albums, particularly New Day Rising, and to a lesser extent Flip Your Wig.  Many, many Hüsker classics reside among Zen's four hallowed sides: "Chartered Trips," "What's Going On," "Pink Turns to Blue," "Turn on the News," and "Something I Learned Today" to roll call a few.

The collection of 57 tracks I'm offering today consist of alternate versions of just about every song on the album, including rough mixes, demos, and even a handful of rehearsal recordings that were recorded via an idling stylus in the studio.  You'll find several instrumental takes here too, including a vocal-less version of "Eight Miles High," a rather incendiary rendition of the Byrds classic that eventually found it's way onto a single that same year.  As for any obvious revelations, it might be wise to temper your expectations, since the variances between these versions and the finished products are slight in some cases.  One particular number that stood out for me was the fourteen minute plus "Reoccurring Dreams" which leads off disk two in expansive and howling fashion.  For a complete breakdown of which tracks are "rough mixes" vs "demos" etc, the info file found in the folder for disk one does a good job of differentiating and cataloging everything.  Special thanks to the generous and anonymous individual who arranged and digitized this collection, made available as a bit torrent last year.  I'll consider offering a flac (lossless) version of this should there be enough interest expressed. 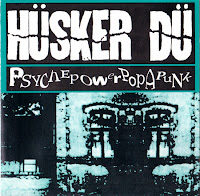 To sweeten the holiday pot, we've also got a silver disk live bootleg, bearing the title Psychepowerpopapunk.  Eighteen cuts from a 1985 performance in Minneapolis (the actual date is not revealed in the CD booklet).  It's quite possible that the entire show is not represented here, but from what my ears are able to discern, this is a soundboard recording, which by the way features a Buddy Holly cover, "You're So Square" sung by Mr. Hart.  Track ten, listed as "Sons of Bitches" on the CD tray card is actually "Celebrated Summer."  The booklet includes an interview wih Bob, which I've scanned in for your reading leisure.  Bon appetit.

Have you ever come across the 12'' of the Ice Cold Ice single which features the live medley thing on it. It's the only Husker b-side to never surface on the 'net.

I might have a dubbed copy of the Ice Cold Ice 12" on tape, but it would take me awhile to unearth it. Will put the word out if I ever do.

Hey Spavid. Thanks a lot for another fantastic year of delights. And this one is brilliant. Cheers and happy new year. Andrew

sweet and good on ya laddie!

Happy New Year to ya'll as well. Glad to see you're enjoying this.

+1 on wanting to hear the rare UK b-side medley

thanks for the great blog! Can you put these Husker demos up in a loss less format? I've never seen these anywhere else

A kind soul has uploaded the live medley from the Ice Cold Ice 12'' onto youtube.

The link to disk 2 has been updated.

I'm late to this party, but this would be the perfect Christmas gift for my brother-in-law. The netkups.com links above are all broken. Any chance you can reupload? Thank you.

I am so grateful for keeping links up for the 3 disks. I found out about the CO for Zen Arcade ridiculously late, around 3 years ago: "There are THREE DISKS of this?" I saw Huskers perform 5 times, starting as an '81 opening act for Black Flag and I was gone on Mould/Hart/Norton from then on. Zen Arcade was and is my favorite '80s album. Some music you listen, love, mull over, grow with, get so close to for a long enough time that it becomes a part of every way you move, everything you do, a part of the frame for how you receive everything that comes to you. So thanks.

hi would it be possible to re-up the zen arcade demos?

thanks for all your efforts!

I’d love it if these links were available again.

Would you please re-up this collection? Re-Dü the Dü, as it were?
Thank you.

I too would LOVE a re-up of this post, intrigued. Thanks!