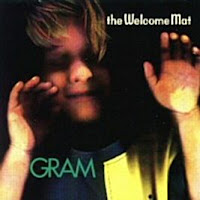 An Australian indie rock act worth their collective weight in gold who opened shop in 1990, and I just found caught wind of them...last week?  Then again, I live in North America, so maybe I shouldn't be too hard on myself.  Somewhere in blogtopia I heard "All or Nothing (More)" and was flabbergasted with The Welcome Mat's ability to fuse the melodic prowess of Geffen-era Teenage Fanclub and Posies with the frenetic axe squalls of Dinosaur Jr.  Talk about a corker.  Per Ian McFarlane's Encyclopedia of Australian Rock and Pop:

Sydney band The Welcome Mat started out as a chirpy, jangly guitar outfit before heading in a tougher, though still melodic and harmony-laced power pop direction...

I hear more of the latter on Gram, their debut album which was preceded by a number of singles/eps, but I gather this was still something of a transitional record for the quartet.   I use the comparison almost to the point of abuse on here, but I'm honing in a lot of parallels to some of the Doughboys later platters, specifically their Crush album, which I believe was also a '93 release.  Certain planets must have been in alignment that year, but I digress.  You can peruse The Welcome Mats full discography on this graying fanpage.  BTW, WM co-founder Wayne Connolly went on to form the equally gratifying Knievel.

Hey Mr Spavid I have the two early eps if you're interested. Hope all's well.

Man alive, why is it so impossible to find their stuff??? I've been hunting the 'spare' and 'fairydust' eps for aaaages. Can we petition wayne connolly & leo mullins to put all their stuff on itunes or something?

Hi - great blog - any chance of re-upping this? Thanks

hi there, any chance of a re-up please? thanks!

hey! A very nice blog. the idea is also great. I like the way how it turned out. Thank you for sharing.Welcome mats

thank you for the blog.I love welcome mats they make visitors feel welcomed

I remember at my first apartment door I had a welcome mats which was written welcome to the boys room. this article brought those memories back