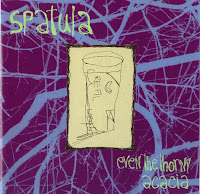 Spatula rarely receive a mention when folks recount the burgeoning '90s heyday of the band's legendary locale of choice, Chapel Hill, NC.  Not least of which I'm sure was due to limited distribution of their debut, Even the Thorny Acacia, and three more platters that followed later in the decade, all doomed to a similar fate.  Nor could Spatula boast the moderately pop-friendly persuasion of figureheads Superchunk and Archers of Loaf.   Were you to stack up Chuck Johnson & Co. with any of their hometown brethren the closest approximation you could come up with is Polvo, most evidently on Acacia's string-mangling "Yoohoo." Truthfully, I don't have a solid handle on the bulk of the Spatula oeuvre, but as of 1994, they (merely a duo on this record, I might add) were cautiously gravitating to post-rock environs, melding dissonance with mathy considerations, tracing a wildly uneven line between Seam, Slint, and a myriad of period artists in between.  The sharpest hook, or perhaps more appropriately, 'thorn' amidst the dynamic clamor of Acacia, is "Thinking Like a Statue," which might pass for a thoughtful Pavement outtake, circa '94.

As of this writing, Chuck is touring the eastern seaboard in support of his recent solo endeavor, A Struggle Not a Thought.   You can delve into a 2010 interview with the man over at Pitchfork.  As for Spatula proper, two subsequent albums, Despina By Land and Under the Veil of Health are available from Squealer Music.

Thanks for sharing! I absolutely love their tune on the "A Day in the Park" comp and always meant to seek more out.

I think I actually was given a free copy of their LP at a improv-jazz show. I could not understand why they were giving them away. I think one of the bands playing might have been on Squeeler. They were an interesting band.

The d/l link has been updated.

Oh, what a pity! the link is inactive again. Will you update it once more please? I am in the process of discovering this Chapel Hill band's music now...

Hi spavid, I'm sorry to be a pain but could I ask you to re-up the spatulas again?

re up files please.

I loved Spatula and this album in 1994 when it came out and I love it every bit as much today. I can say that about very little from that time/place.