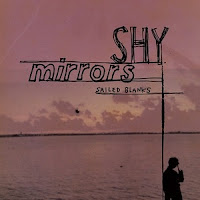 Though I've never broached the topic of them on these pages, Champaign, IL's Wolfie were a perennial favorite of mine circa the late '90s.  Frontman Joel Ziemba and co-vocalist/keyboard pumper Amanda Lyons comprised the nuclei of that quartet, but it was guitarist Mike Downey that provided the "crunch" needed to offset the group's twee overtones, heavy handed as they sometimes were.  Mike departed in 2000 with Wolfie folding not long after that, leaving him to pursue his predominantly solo endeavor, The National Splits.  Shy Mirrors is his latest, and IMO greatest post-Wolfie pursuit.

Furthermore, Sailed Blanks is perhaps the finest LP of 2011's late-breaking releases.  That being said, it's an album that won't present itself as a sonic revelation to anyone that was weened on Superchunk's No Pocky for Kitty and On the Mouth, but for listeners possessing an appreciation of that indie-punk caliber will nonetheless relish the unremitting, power chord maelstrom of uber medodic stunners like "Face Paint" and "Lake Placid Flyer."  Things get even fiercer on "I'm Not Around" which recalls the barreling firepower brought on by the likes of the Marked Men and Exploding Hearts.  In general, Sailed Blanks suggests what Weezer would have emerged with on the Blue Album had Rivers & Co. been given the option to commit it to four-track.  I'd be remiss if I failed to note that that a fresh-outta-the garage, lo-fi aesthetic dominates the eleven songs housed within, lending a whole lot of charm to this affair as well.  Two minute songs, a total blast, and an out-an-out winner.  Now that you're ready to lay down some coin, you can do so either through Big School Records for the gnarly transparent vinyl edition, or digitally at Bandcamp.
Posted by spavid at 9:35 PM

Thanks for this great stuff. - Dave from Loomis