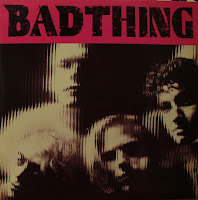 With all due respect to Minneapolis' grand '80s trifecta (Husker Du, The Replacements, and Soul Asylum) there were more than a few Twin Cities denizens that looked beyond their fabled backyard for inspiration.  Described in a 1990 band bio as "fast urban electric loudness," Bad Thing's distillation of lead foot rawk 'n roll steered more in the direction of Drivin' 'n Cryin,' Snatches of Pink, and judging from Candy From a Stranger's pounding, leadoff salvo, "Scarlet Red," the Georgia Satellites as well.  No frills, no laptops...not a bad thing at all.  The band is also survived by a 1990 7" which you can read quite a bit about here.

i can't find the original files, and don't have time to go through and re-up right now, but i thought you might be interested in some of the words...

d'oh! i didn't even see you already plugged my little post. my bad. serves me right for speed reading.

No problem. Saw your latest comment under the O/S record from last week. You're not going to believe this, but when I was used record shopping over the summer I bought a Brilliant Orange ep! Still haven't played it, but as long as I'm not completely turned off by it (which I doubt I will be) I'd be happy to share it. It came out on Zulu Records I believe. Your lucky day.