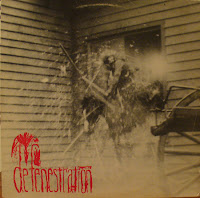 It was almost two years ago that I did an entry on Defenestration's proper full length, Dali Does Windows, so I suppose it's about time that I dedicate some space to their self-titled ep, which preceded Dali by a good three years.  Even if the group's prime mover Tyson Meade didn't go onto to greater success with his subsequent outfit, the Chainsaw Kittens, it would still be worth the namecheck, as his singular vocal pastiche goes much further in defining Defenestration's overall shtick than his backing mates do.  While still plenty left of center, the band hadn't quite achieved the heftier velocity that would inform the proceedings of Dali Does Windows, and furthermore the Kittens, but they were getting there.  "Lovers Grow in the Park" and "Feminism on Television" exude some really sweet jangly moments, and in spite of the violent sleeve art, it's strangely comforting to know that Meade is a pop-smith at heart.  A much more thorough, song by song dissertation of the record can be absorbed here.

Killer, thanks so much for putting up this rarity.

First as always thank you. If you ever find time would you mind re-upping this and the album as well. I really appreciate it.

Re-up, please! Thank you in advance.