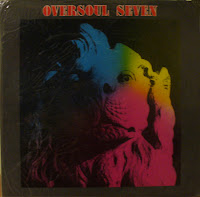 This is a follow-up to my share of Oversoul Seven's self-titled long player which I posted all the way back in January.  Since Fool Revelation preceded that album by about a year, I had anticipated it would possess a rawer, unbridled ethos, but I suppose that was wishful thinking on my part.  Turns out that Fool Revelation isn't so much of an engrossing revelation after all, but it does find the young Vancouver trio churning out clean, competent guitar pop, just not as roughhewn or DIY as it's oblique jacket art might suggest.  If there was anything on here that approached the brash musculature I was anticipating, the punchy "Over Mountain" was pretty much what the doctor ordered.  See my write-up for the second record (linked above), and for that matter the comments section.  One of our readers mentioned that Revelation was funded by Oversoul Seven's winnings in a band competition.  True story.

so happy to hear this again. my vinyl was scratched beyond repair from overplaying...

i was in the same competition as Oversoul Seven.... my band lost. but still, good times!

Thanks Justin. Glad I could help. BTW, what was your band called? Maybe we can get your crew onto Wilfully Obscure.

i think we were even more obscure than wilfully. that particular band was Silent Gathering - we played with the Sarcastic Mannequins and Oversoul Seven. i think possibly a demo tape survived from that band, but nothing more - however, the singer moved on to play in Windwalker, I joined up with Blaise Pascal (& recorded the "Foreword" LP on Cave Canem Records in 1994), and the guitarist played in a whole lot of other bands (including Superconductor) - then after all that - i hit Seattle and recorded with Black Nite Crash. (musical history; very short version)

Thanks for the backstory on your band Justin. BTW, was that the same Blaise Pascal that had a song on the Day in the Park compilation?

yeah - that was the same band. Day in the Park and the efilter EP were before i joined the band. there was a split 7" with Blaise Pascal after i left the band as well - think with Ladybug Transistor....
and i am really enjoying the Oversoul Seven.... you wouldn't happen to have any Brilliant Orange lying around, wouldja? one band leads to another, in my head...