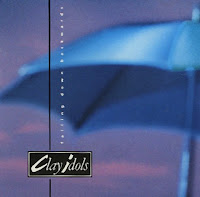 This artifact isn't exactly in keeping with the theme of Thanksgiving...but what are you gonna do about it?   From the looks of their Myspace page, the Clay Idols called Los Angeles home, and at one time featured future Bad Religion drummer Bobby Schayer in their lineup.  In fact, Bobby's brother Steven fronted the Idols, yet they couldn't be further removed from that aforementioned hardcore juggernaut.  Nope, this quartet's flavor of choice was acoustic-laden alterna-pop, all contemplative and such.  Falling Down Backwards exudes a certain weariness hinting that the band were wont to pluck a page or two from Bob Mould's Workbook, without resorting to anything totally derivative. Coincidentally, Steven Schayer's timbre bears a strong resemblance to Lotion's Tony Zajkowski, but only would someone with a lot of time to listen to obscure indie rock would draw that parallel.  Falling... was available on CD, but this rip was taken from wax.

I LOVEEEEE this album.

Hello, this is Psychopomp of Ten Thousand Eyes. Having seen this post about Clay Idols, I want to let you know that a couple months ago I posted about (and uploaded) Clay Idols and more specifically the first mLP entitled "Every Day Starts Like This". The sound is mellow and alterntive-ish and contains a couple great songs. The truth is that I didn't know anything about those guys, so the information you got here is great. Here's the link:http://dekaxiliadesmatia.blogspot.gr/2015/03/less-wordsmore-music-issue-7.html
Thank you.

Am just ripping this today,better than I remembered-definitely brightened my day!

Finally getting around to listening to this. At first it seemed a little too commercial and slick, but it's really kicking in about mid-LP and the "commercial" flourishes actually work and add to the impact. Good stuff.