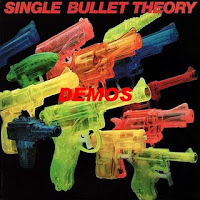 Thought this might be of some interest to you out there. Single Bullet Theory were an AOR/power-pop band based out of Richmond, VA, who released a rather underpromoted album for the Columbia Records Nemperor imprint (yep, home to the Romantics) in 1982. For the curious, it may still be available for d/l from Best Kept Secrets blog, but these nine songs were recorded well before that. In fact, only two of them carried over to the the album ("Anxious," and their no-hit wonder signature song "Keep It Tight"). SBT were up the same alley as The Knack, Tommy Tutone, and more vaguely the Paul Collins Beat, but they possessed a streetwise streak that was seemingly neutered from a lot of their more prominent contemporaries. A very thorough bio on the band can be read here, plus the aforementioned Best Kept Secrets has a You Tube clip of the "Keep It Tight" video. I should also metion that there's a metal band making the rounds these days going by the same name, but I don't think you'll be confused.

Any chance you could re-up or email me these demos? Thanks!
bjkramp@gmail.com