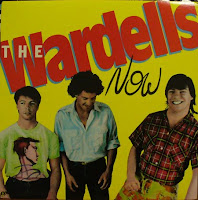 According to the back sleeve of this disk, The Wardells, Jim on guitar and vocals, Jeff on bass, and Rich rounding out the trio on drums, all share the aforementioned moniker as their surname. One can't be sure if these Vancouver-ites are literally bound by DNA, or if they're simply feigning brotherhood a la the Ramones. At any rate, what really piqued my curiosity regarding The Wardells Now LP, more or less entailed a production/engineering credit by one Bill Napier-Hemy of the legendary Pointed Sticks. The resulting album paints a crisp portrait of a competent three-chord bar band, but if you're looking for the visionary genius of say, The Pointed Sticks, you might want to keep shopping. Nevertheless, Now is still fairly worthy for what it is, particularly much of side two. Interestingly enough, what little else I was able to absorb by the Wardells manifested themselves in a pair of 1986, local compilation appearances. As a bonus, I'm tacking on the better of these two songs, the chimey "Laughing Instead," hinting at how The Wardells might have turned out had they opted for a less pedestrian bent.

If you like the Wardells, also look for singer Pete Campbell's later band the Sweaters or, even better, his previous band Pink Steel.

Damn good work, and another album I can stop my hunt for now.

saw these guys open up for husker du at a now defunct legendary club called luv-a-fair in vancouver, probably in 1986....think they are originally from victoria bc on vancouver island....good show either way

Thanks for the follow-up info folks. I ran into a mention of Pink Steel when I was looking for info on these guys, but forgot to mention them. Will definitely check out the Sweaters.

Many thankx friend for this and for all music. Great blog.