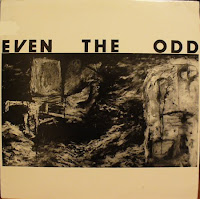 Given the sheer ubiquity of his production/engineering work throughout the 1980s, one is under the surreal impression that Mitch Easter cloned himself to tend to the scores of projects that fell into his lap. Sure, there was REM, Game Theory, and his own Let's Active, but there were a lot of worthy also-rans too like upstate New York's Even the Odd. This self titled collection isn't flush with wall-to-wall Richenbackers, but nevertheless there's still a quotient of jangly vibes informing the trio's penchant for straightforward guitar pop, a la Crowded House and early Marshall Crenshaw. Easter not only engineered this affair, he contributed six-strings to "Cos You're Here," while his Let's Active cohort Angie Carlson sings backing vocals on a couple tracks to boot. All in all Even the Odd is a winning set, though not particularly revelatory. The album was released on CD, but I have yet to come across a copy on that most coveted format.

thank god for mitch easter i say...back in england in the mid eighties the only source of info on what was happening stateside was bucketfull of brains...but mitch and don dixons production on those early rem albums led me to lets active, game theory dumptruck the connels, for a few years there the name eater on a sleeve was a guarentee that something worth hearing lay within....

There's a CD copy available for $15 at gemm.com.

Thanks for introducing me to so much great music and for reminding me of some old favorites.

I have an "Even the Odd" CD from 1991 titled "Medicine Man." Doesn't sound like the same band, unless they went through some lineup changes. Can you post the members of the band?

I've been cleaning out my CD collection and wondered if this was worth anything.

Is it worth anything?