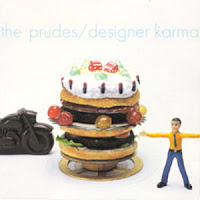 Hey folks. Remember when I posted that spiffy four-song, various artists 7" comp on Imaginary Records back in April? Sure you do. That disk featured a song by a UK combo called The Prudes who made a lasting impression on me with their contribution "True Religion." Didn't realize it at the time, but that track was accompanied by nine others on an album, Designer Karma, which I've decided to lay on your ears tonight. The most thorough biographical data (including brief testimonials from some of the band members) I was able to unearth on the band can be scoured on the fine Because Midway Still Aren't Coming Back blog.


Formed in 1987, The Prudes probably blended in a little too well with overshadowing, pre-Britpop contemporaries like The Candy Skins, Stone Roses, early-Soup Dragons, and even the Close Lobsters. Not quite jangly enough to be lumped in with the C86'ers, but far more linear than the Madchester burnouts nipping at their heels, The Prudes were quite simply a highly adept band that slipped through the cracks. None of their records (namely this LP produced by the late Adrian Borland, and a handful of singles) were released outside of Britain, and regretfully I don't own any original copies myself. Once again, this post was made possible through the generous file traders on Soulseek. If you're craving more, you can hear a non-lp Prudes selection on the blog linked above.

01. Designer Karma
02. You're Changing Into Something That I Don't Like (And So Am I)
03. Powerful Brain (Why Don't You Use It)
04. Never Penetrate
05. Peace Is Milk
06. Your Beautiful Depression
07. Dumb, Dumb, Dumb
08. Surrender Dorothy
09. True Religion
10. Something Tells Me That Nothing's Going To Happen Tonight