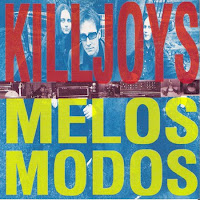 Here it is, by popular demand, the third and final studio outing for Ontario's Killjoys. Their Starry and Gimme Five albums went over so well on these pages that I had no choice but to complete the trifecta. Melos Modos was my first exposure to the band, and though I don't think it's holds up quite as the first two Killjoys records, it impressed me enough to immerse myself in more of their music. The album title doesn't seem to have an exact translation, but "modo" is Spanish for "music." "Melos" can't be too far detached from "mellow" (at least I'm assuming), so if the idea The Killjoys were driving at was "mellow music," the title is somewhat befitting in that the album is significantly less frantic than what they'd been doing up until this point. Melos lends itself to more refined, singer-songwriter observations, but still finds the group kicking up a little dust on "Honesty Mistake" and "Lucky Me." The Killjoys by and large matured on the same trajectory as Evan Dando with the Lemonheads. Too bad they only lasted three albums (not counting the live Onenight and a Morningafter that followed posthumously).

If you liked all these Killjoys releases, then you'll need to seek out Mike Trebilcock's(The singer/songwriter/frontman from The Killjoys) solo release, "Shield Millions" released 2001. Fantastic album kind of blending elements of all three Killjoys albums with a more singer/songwriter appoarch. It's on iTunes or CD and be bought through CD Baby