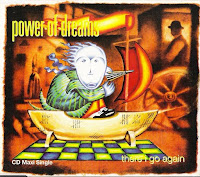 Last May I posted the better part of the discography of a Dublin, Ireland band called Power of Dreams. To my knowledge, they received next-to-no notoriety on our side of the pond, and fared little better on theirs, but despite toiling in U2's formidable shadow, Power of Dreams vision was equally grand in scope, though far less visible. "There I Go Again," a single culled from their 2 Hell With Common Sense album is a solid example as any of the sweeping, amped-out swath they cut in the early '90s. As was/is so often the case in the UK, multiple formats of the single were ushered to market, with the CD and 10" vinyl version sharing the title cut, and offering three entirely different b-sides. I've decided to offer both of them in their entirety. Alongside a pair of decent originals (one included as a bonus cut to the Japanese version of 2 Hell With Common Sense), the 10" version of this extended single is a lukewarm run-through of the Velvets "Pale Blue Eyes." 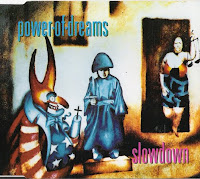 I'm also including another CD single from the same album, the equally stimulating "Slowdown," which also houses three non-lp b-sides. The single version of "Slowdown" is a slightly watered down mix of the album version, a move that made no common sense in itself. To check out the complete 2 Hell With Common Sense LP, along with their 1990 debut, Immigrants, Emigrants, and Me, and the 1993 singles collection Positivity, enjoy here. BTW, there's a Power of Dreams Myspace page, listing among other things 2010 reunion tour dates.
There I Go Again CDS
01. There I Go Again
02. Follow (Slight Return)
03. Suburbia
04. Anxious
There I Go Again 10"
01. There I Go Again
02. Pale Blue Eyes
03. The Cross
04. Fall
Slowdown CDS
01. Slowdown
02. Fatherland
03. I Know You Well
04. Sorry Update 12/21/09: Hate to do this to you folks, but I had a take down requst for these. The good news is that you can buy the There I Go Again cd single on Itunes, and perhaps Slowdown to follow.
Posted by spavid at 8:44 PM

Hiya! The link for the last one ("Slowdown") doesn't work, but if you just put an "r" at the end of it - VOILA! Perfection. Thanks so much!

Will fix that. Thanks for alerting me.

Wow nice post! My favorite band as I'm sure you figured out, I have all of their stuff including the 10" I think there may be a single for The Jokes On Me because I have 2 that I believe are the B-sides for it. I've never been able to track it down, or a few other rarities by the band. Let me know what else you may have, all future posts or info is greatly appreciated!