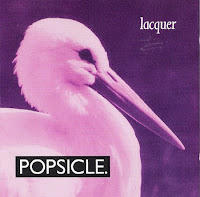 Strangely enough, in the two and a half years since I began this blog, I somehow neglected sharing this jewel of an album from Sweden's defunct Popsicle. Were it not for the fact that they existed just prior to explosion of the World Wide Web, they would probably have at least a modest online presence on the web, but the best I could find thus far was a thorough discography and a Myspace fanpage. Popsicle were an enormously talented power-pop quartet, in league with other commendable Scandinavian outfits like The Merrymakers, Johan, and The Drowners, If you're at all familiar with the output of the Skellefteå-based West Side Fabrication label, especially during the '90s, these guys will be right up your alley.


The near-mesmerising Lacquer was the first of three albums, and I'd be apt to argue it was their finest moment at that. Popsicle wizardly juxtapositioned lucid, buoyant pop with dizzying surges of power chords, (albeit not always in the confines of the same song) hemmed together with a bazillion hooks that set in like India ink. Not unlike the trio of bands I rattled off above, for me Popsicle's most unique facet was a singer (Andreas Mattson) who's pipes bore a significant resemblance to Bernard Sumner of New Order. In fact, if New Order had spilled over into the Poptopia neighborhood for a spell they'd probably sound something like this. At any rate, I can't heap enough praise onto this disk, so enjoy.

Great...this record goes along with me for about 15 years and i´m never getting tired to hear it.

this was a good start to band.

abstinence album was better imho.
(and popsicle album -96 is perfect even it is different than those two)

discogs.com discography is not perfect. they released some singles and albums more than discogs shows.

I'm more of a fan of the 3rd (s/t) and Stand Up And Testify, but all of these are fantastic. Love the other singers stuff too.

Do you have the Sweet Chariots? It's Andreas and Nicklas Frisk (from Atomic Swing/A Camp). Not as good as Popsicle but still pretty cool!

Thank you! I found this album when I was sixteen, back in 2004. Luckily enough I got a chance to see them att Cirkus, Stockholm 2005.

Hi. Would it be possible to re-up this? Thank you!

Hello.
Is it possible to re-up this CD?
Thank you very much!