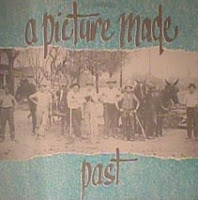 Mitch Easter's sphere of influence, as noted in several previous entries on these pages, seemingly spanned an array of distant galaxies (actually, more like the Southeastern US) during the producer's '80s halcyon period. The little known A Picture Made fell into our man's clutches in 1988 for this six-track ep, possibly the trio's only recording of note. The noise emanating from Past wafts it's way through familiar, well-traveled corridors with some none-too-surprising touchstones like the Miracle Legion, Dreams So Real, and to a lesser extent the Dream Syndicate. The title track yields the ep's sweetest moment, while the edgy "Throw Some Light My Way," is comparatively speaking a full-throttle barnburner, kicking up some serious dust. My apologies in advance for the vinyl noise. If I come across a cleaner copy, it will be my pleasure to share it.

A Picture Made also had a flexi that came with an issue of Jet Lag (or one of those crappy zines), around '86 or so. I remember because the song was called "God Loves a Hell of a Man", and it was a total R.E.M. cop-- I was thinking 'here we go, all these knockoff bands are going to start sounding like this now.'

Of course, back then there was barely any monetary advantage to sounding like The Replacements or R.E.M. or Husker Du, unlike for the sound-alike bands now.

Sounds interesting. If you have it, feel free to post it.

I remember "God Loves a Hell of a Man" as being a really great song - as I recall, it had a powerful vocal on the chorus. It was R.E.M.y. Would love to hear it again - hope someone can post a copy.

I was in a band (high school) prior to A Picture Made with Bryan (vocals) and Eric (guitar). They released a CD EP about 1996 or so that was live to two track and produced by recent Grammy award winning engineer Vance Powell (The Raconteurs). Vance was also their live sound engineer and road manager. They toured with the Replacements for awhile, and The Connells quite a lot around 88-89. They were a fantastic band live, guitar engineered a few times for Eric and they could whip a crowd into a frenzy! Thanks for bringing back a few memories!

I remember quite definately the most powerful musical experiences of my early years envolved A Picure Made shows in Pittsburg Ks, McCarthys Pub!!
Vance would stick phones on my head and pipe through Brian Jones's Bass mix and I never found a better bass tone than that Stingray/Ampeg setup!!! Moshed those great jams, and had the best times! Thanks Brian, Eric, Brian, Steve
and Vance!!!

I still have their cassette in my office

Thank you so much for reactivating the link- I know I'm not going to be the only one who's thrilled to be able to hear it again!

a picture made shows were *so*much*fun* back in the day, and I'm so excited a new album is coming out!!!