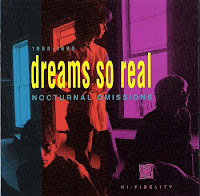 My first encounter with Dreams So Real, was their video for "Rough Night in Jerico," from their major label debut album of the same name, sometime back in 1988. Although "Rough Night..." had all the earmarks of a rock and roll classic (which I still esteem to this day), I was in for even more of a treat when I heard their first LP, Father's House. Hailing from the alt-rock hotbed of Athens, Georgia, Dreams So Real, as did many bands from that era (and area) took a page from REM. In DSR's case, they honed in dead-center on Peter Buck's crystalline Rickenbacker jangle, and just ran with it on Father's House, albeit with a slightly more pedestrian approach.


Preceding that album, was the "Everywhere Girl"/"Whirl" 7" on Coyote Records in 1985. These two songs were quintessential examples of the southern indie-rock sound of the 198os, and also function as the unofficial centerpiece for Nocturnal Omissions, a Dreams So Real "fan club" CD of outtakes and rarities of damn-near every song that didn't make it's way on to the band's three official albums. Released in 1992, it chronologically follows DSR through every phase of their brief and largely ignored tenure. There's so much gold to warrant mentioning here - pre-Father's House demos, "Golden" from the Athens, GA Inside/Out soundtrack, copious outtakes from their two Arista albums (including a collaboration with the B52s Cindy Wilson on "Appalachee Shoals"), a pair of Christmas tunes, and an embarrassing foray into old-school rap. Dig in, but as precursor for anyone new to Dreams So Real, you may want to check out their debut album from here.

I'm very happy to have this, I've always been curious to hear more DSR, having been a fan of "Golden" and "ROUGH NIGHT IN JERICO" since the '80s. A few tracks sound a little wonky, like the skip at the beginning of track 12, or the jumps in the middle of track 10. Is this the way they sound on the original cd or did something happen in the rip? Excellent stuff throughout, much of it's as good as anything I'd heard from them previously. Thanks a lot.

Man, thanks for posting this album cover! I have been looking for a digital image of it ever since I ripped this album. I bought the CD from the band in 1993 or 1994 when they Played in Knoxville, TN. It's one of my favorite albums. yeah I know I could have found a scanner somewhere and did it myself but I don't have access to one. Thank you!

I like their early singles more than the albums. Everywhere Girl / Whirl was also my introduction to Dreams So Real. Thanks for the post!

Where can I buy o copy of this record?

Thanks for posting this! I just saw DSR last Saturday in Atlanta (they are still amazing live!) & I have been tearing my place apart looking for my copy of Nocturnal Omissions, or a way to play my Father's House LP. I really, really love the old stuff... so now I am calm & happy thanks to you!

alyciaengel... how did you get the music? I've been trying to download and it keeps saying the link is no longer available.. I haven't heard this in its entirety since the early nineties- now I just have a couple broken up recordings from it. Dying to get my hands on the whole thing again :)

It worked when I found this link, but now it looks like it is marked as illegal. Bummer! Hopefully they will reissue it someday. I know that they were considering the possibility of recording new material. Maybe you could contact them through their website: http://dreamssoreal.com/

Is there any way you could upload this to YouTube? I have been looking for this for a few years and the request I made at the DSR web site was never answered. Thanks so much!

Hi there. Any chance of a re-up? I have just discovered this amazing band. Thanks.

Would love it if you could re-up this. Thanks in advnance!