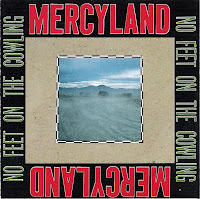 Athens, Georgia churned out many a landmark modern rock band throughout the '80s, and Mercyland were no exception. However this unique power-trio weren't often associated with their locale, so much as their lineage. If you're a fan of yet another power-trio, that being the Bob Mould-led Sugar, you may be familiar with a Mercyland alumni named, David Barbe, who traded the roll of that band's lead-man to full-time bassist for Sugar. Sugar by the way were one of the only "original" bands on the predominately reissue label, Rykodisc

Mercyland had something of an indigenous flair that hasn't been replicated since (not that anyone has deliberately tried). Pegged as a "punk," band, their foundations are more rooted in pop and Midwestern rock. David Barbe possessed a commanding, yet haggard delivery, amidst a flurry of jangly, hard-strummed power chords. The formula worked, but few beyond the southeast had the opportunity to experience Mercyland.

Buoyed by the success of Sugar, Rykodisc packaged a collection of out of print Mercyland material, Spillage in 1994. Up until then, it was the only cd available of the band's singles and compilation appearances, however Mercyland's lone album, No Feet on the Cowling, had enjoyed a small run of cds, along with a more widely available vinyl version. This post is from the cd, that which by the way has two bonus tracks. Aren't I the lucky one? For new listeners, Spillage is the place to start, but for those already familiar with it, check out this album for a more complete picture of the band. By the way, Spillage has shown up in many a used-cd bargain bin. It's worth every penny...all fifty of them.

There's also a great Mercyland article that can be read here

Hey Man, Great post! I actually wrote that article you linked to.
Mercyland was one of the best Athens bands ever.
take care.

Hi Gordon. Didn't even check the comments until today. By any chance do you know if Mercyland have any unreleased recordings tucked away somwhere?

Thanks for your input.

As far as I know they don't have anything else to release. I mean, there may be an oddball track or two lying around somewhere but nothing like a hidden, lost album or such.

hey man I played guitar on this album, thanks for sharing it with a few more folks. david has recently remixed this record and we are in the process of re-releasing it online. sounds MUCH better without all the reverb and other crap that was added to the original mix. if interested i'll pass along more info. also, there is (believe it or not) a mercyland facebook page. btw we do have some unreleased stuff, may see the light of day if we have any success with this re-release.

David Barbe's remix of this album is available here: http://mercyland.bandcamp.com/album/no-feet-on-the-cowling

Never heard of this until I downloaded it. Definitely gonna pick it up next time I see it.

Please re-up this link. Would love to hear this. Thanks.

I just bought the original CD version of No Feet on the Cowling; I had previously bought four of the songs from the Bandcamp re-release. Though the reverb-heavy original production job on the album is inferior to my ears to the David Barbe remixed version released 20+ years later, the CD still is worth picking up; it contains three tracks not on the Bandcamp version (two of which were also not on the original LP). To my ears, one of those exclusive tracks, "Patty's Gone", is a pretty good song and another bonus track, closer "Somebody I Know Is Going to Die", is also solid.

IMO, No Feet on the Cowling is considerably stronger than Spillage; at least to me it seems like Mercyland hit their peak in the late 1987/1988 time frame. I'll note that although David Barbe wrote the majority of Mercyland's standout songs as the band's primary songwriter, Andrew Donaldson also contributed a couple of very good songs on No Feet on the Cowling, composing "Bigwind from E. Jesus" and "Rotten on the Vine".