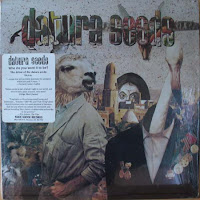 Although Who Do You Want It to Be? was released well into the digital age (1989 to be exact) Datura Seed's lone album was for whatever the reason a vinyl-only affair. That is partially why I was inspired to post it - that and the fact that it was a great album, totally overlooked by the punks and the indie-pop kids. Hailing from Indianapolis, the Datura Seeds lineage is fairly straightforward. It essentially falls on the most recognizable name in the lineup, Paul Mahern, lead singer for the talented Indy hardcore band The Zero Boys who burned out in the early 80s, and again for a little while during the '90s.


Who Do You Want It to Be? owes little or nothing to the Zero Boys spastic, whiplash punk, but didn't cater to the elitist college-rock movement of it's era either. The Datura Seeds almost effortlessly exuded sprite, trebely power-pop cum post-punk, with a unique angle on things, courtesy of Mahren's nasally pipes and a crack backing band that couldn't have been a more appropriate fit. You just have to hear it, to hear it, so press that right mouse button now. If you dig, go here for a handful of non-lp Datura songs, including the fine b-side "D.A. Pop," and a couple of demos.

great blog...i have this LP and haven't listened to it in years...good choice, though!

For the sake of historical accuracy, this album was also released on audio cassette (also Toxic Shock). I consider my used copy to be a magical "find" at a locally-owned Chicago music store in 1992 after moving from Indiana where I'd had the great fortune to enjoy a couple live shows by Datura Seeds. The cassette was played almost non-stop that whole summer. Excellent.

yeah, this album had a magical grip on me when i bought it on a whim in a used record store in california. thanks for making this site!

It has been so difficult for me to find this record, I think is easier to purchase generic viagra than to get a copy of the vinyl album.

any way to re-up this one?

Link has been replaced.

I still have my cassette aand listen to it often, i ordered back then because the ad said "hard pop" this was before there were pop punk bands everywhere

could someone please please re up

Yo hows it going