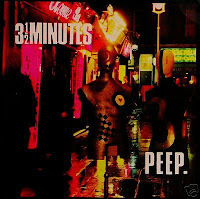 Thank god for mix tapes, and for that matter, anglophile music fans that know a good import bin when they find one. Truthfully, I don't remember the name of the individual who was smart enough to tape me 3 1/2 Minutes Peep EP in it's entirety on a 90 minute Fuji cassette some fifteen years ago, but trust me folks when I offer them the utmost thanks. From all I can glean, 3 1/2 Minutes hailed from the Hertfordshire region of the UK. Their discography consisted of two EPs, both of which can be downloaded via the links below. 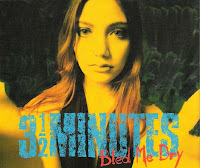 As I have already mentioned privately to some of the browsers of Wilfully Obscure, the band's debut EP, Peep (vinyl only by the way) is one of the most electrifying records in my collection. Musically, the Minutes clearly belonged in the same camp as Mega City Four, and to a lesser extent, Ned's Atomic Dustbin. Each song is an absolute rush of feedback-addled guitars and punk ferocity, without sacrificing melody one iota. It's a must download/listen.
Peep was followed up a year later with the the noticeably subdued, four-cut Bled Me Dry. 3 1/2 Minutes weren't going "pop," so much as maturing. In spite of it's indie-label pedigree, released on the tiny Scared Hitless imprint, the title track actually wound up on the Son In Law soundtrack in 1993. Now that's what I call unlikely.
Peep ep (1992)
01. Feelings M
02. Shake It Up
03. M.C.D.
04. Sodium
05. Shit Sells

Now streaming on Apple.
Posted by spavid at 8:13 PM

great post!! it's gems like these that make me never lose hope flipping through those dollar bins!!

hopefully i can come up with something as equally exciting for you!!

Thanks - I don't actually have copies of these tracks - wow. It's been a while, but The Spellblinding Mr Benn's was actually one of my favourite songs...

The files have been re-up'd. Enjoy.

I was doing some research for my regular chart review which includes a piece about Blur this week as their Best Of is heading back into the top 40 after the Brits. I was at the infamous Shelter benefit gig in July 1992 but couldn't remember the fourth band (after Blur, Mega City Four and Suede). That band was 3 1/2 Minutes.

I remember seeing these on a support slot for a band I liked at the time. So went out and bought the Peep EP.
Just sold it with th rest of my vinyl (no room) I know you've already reposted the songs but if there is any chance of you doing it again, I would be extremely grateful
N

Thanks for that, just as raw as I remember

Just picked up the 12'' ep vinyl in a charity shop in Irvine, Scotland for £1. It's fckin ace!