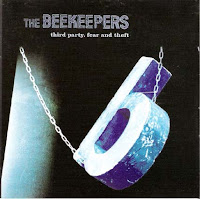 The Beekeepers were a short lived UK outfit that managed to release the Third Party, Fear and Theft album and a string of EPs on Beggars Banquet Records. There was no release on my side of the pond, and from what I can tell they enjoyed minimal notoriety in their home country. Considering this album was issued after Brit-Pop's much lauded reign, I suppose it would have been useless to genre-ize The Beekeeper, so maybe that's what did them in. All of this is utter conjecture of course so I'll quit babbling. Do yourself a favor and click on the hyperlink above for more historical data.


As for the Beekeepers all too meager one-shot deal, Third Party... is a near phenomenal album, all crunchy guitar and hooks galore, brandishing anthematic tunes like the rollicking "Do You Behave Like That at Home?," and "Inheritance." Truth be told, the 'Keepers did have some like-minded British counterparts, specifically Compulsion, and the recently posted Family Cat, but without a "scene" to associate them to, the band seemingly fell by the wayside. Thankfully, we were left with a choice souvenir.


Now available from the powers that be at iTunes and Amazon Downloads.
Posted by spavid at 5:48 PM

great album and they were even better live...

My dad is convinced that these guys woulda been bigger had they taken his advice and called themselves Thee Beekeepers.

This title is similar to Momus "Third Party, Fire And Theft"
and I want to ask you, are you going to upload this again and other absent urls in your blog?
Polara is good!