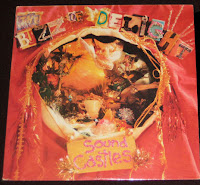 Most die-hard Matthew Sweet fans may have heard of Buzz of Delight, just not their music. They’re missing out, but I’ll try to compensate with this post. B of D came on the heels of the the defunct Oh-Ok, a celebrated outfit from Athens, GA that Matthew Sweet was a not so illustrious member of. Around ’83 and ’84, Sweet and fellow Oh-Ok alumni, David Pierce formed the short lived, but quite phenomenal duo, Buzz of Delight. Their lone ep, Sound Castles, was produced by Don Dixon in 1984. Soon thereafter, Sweet pursued a solo career and was never heard from again. Ever.

With Buzz of Delight, Sweet married the breezy, ethereal pastiche of the “new romantic” strain of new-wave, to the skittish obscurity of the nuevo-southern pop contingent of the period: REM, Pylon, and Let’s Active, uber-producer Mitch Easter, yada yada. There’s a purity that wafts it’s way through Sound Castles, that Matthew Sweet would never replicate again, or for that matter, try to - and that’s what makes this all the more special.

Tacked on the ep is “I’ve Got Gold,” a cut from the Db Records compilation, Squares Blot Out the Sun, which may be uploaded in it’s entirety on this page at a later time, but as usual, I digress.

“Ask for Jill” credited to The Jacks, was from a one off session with Don Dixon and Chris Stamey. The song would later be recorded by Stamey’s legendary band, the dBs. Outtakes from the Sound Castles sessions can be found on Sweet’s To Understand – the Early Recordings of Matthew Sweet compilation.

07. I’ve Got Gold (from Squares Blot Out the Sun compilation)
08. Ask for Jill (performed by The Jacks)

>Sweet pursued a solo career and was never heard from again. Ever.

Apparently, you must have never been at HOTH when I was working!

HOTH? Never heard of it. Ever.

guess I walked into that one!

Thanks for the Buzz of Delight. I had the LP back in the day. Still looking for The Individuals "Fields" or "Aquamarine" if you have either of these. that was a great era for music.

Hey, just found your blog, thanks so much for uploading this...i love this record !!! Brilliant stuff..can't stop listening to it..In Summer is a great tune !!!

looks like all the promos i got back in the day at ye olde Spectator, and about half of the stuff in my basement!

those were some good times and great music.

maybe i should dig out my old "Pop Capsules" columns and finally get 'em up. Lord knows the current excuse for "music writing" takes itself sooooo seriously!

Thanks for this article. My name is David Pierce and I was the oother half of The Buzz Of Delight. I've posted several live tracks and some un-released ones here: http://buzzofdelight.podbean.com/

D'oh! Link is broken worse than Masticore. Of course, this is, like, five years later.

can you please re-post this EP?

can you please re-post this EP?

I wonder if you were the guy who outbid me on this the first time I went for it on Ebay. I was the winning bidder a few years later for more than I would have liked to have paid. And, then, of course, I proceeded to find a copy in good shape in a $1 bin.

Hi to David Pierce if he's still following this. I will check out that site. You must have some interesting stories of those days.

Link provided does not work. I thought this was updated? Still shows that old link.

Hi Elizabeth. Thanks for the heads up. By sheer coincidence I think I stumbled upon a music podcast of yours quite recently. I have something I'd like to ask you. Feel free to email me (my addy is in my user profile). Thanks again.

Hi, there. When time permits, would you mind doing a re-up? Thank you.

Could you reup this please? Thanks.

Im pretty sure my Buzz Of Delight podcast is still up on Podomatic.com

Search Buzz of Delight on Podomatic.com for all our old tunes
-David

Hi David. I appreciate the linkage, but for some reason I can't get to the site. Can you offer another link? Thanks for reaching out. Would love to hear this stuff.