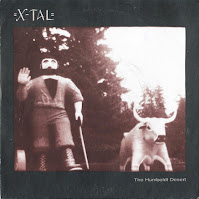 Even for someone like myself who gorges himself on "fringe" bands from the last century, even my fringes have fringes, so to speak.  I'm not talking about weirdo/outsider purveyors, so much as artists I didn't have an adequate time to investigate due to be so deluged with everything else that dropped onto my plate.  I knew of San Fran's X-tal (by name anyway) when they were still active in the '90s, but didn't hear a note until well into the 2000s.  Looks like I neglected on a genuinely talented bunch who emanated shades of the Feelies and Velvets not to mention oodles of other substantive, left-off-the-dial types.  The deftly written "The Humboldt Desert" is a near toe-tapping ditty about...deforestation?  Strangely enough X-tal's formula works like a charm here, as well as the two songs on the other side of the coin.  "More Fun in the New World Order" is not a sardonic cover of rewrite of the X staple, rather a riveting 86-second original railing against U.S. involvement in the Gulf War.

If anything else, let these three songs be a taster of sorts for the remainder of X-tal's recorded output, now  available at your leisure on Bandcamp.

A. The Humboldt Desert
B1. Damp in the Trenches
B2. More Fun in the New World Order

X-tal this excellent band from S.F. which i have all, except for the first.
Thanks for this, Josef

His current duo, the Granite Countertops, made a covers album with some intriguing choices:

Oh wow, thanks! Been ages since I've listened to them.