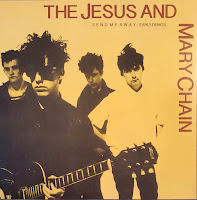 Ok, so right up front this is not an official releases, so lower whatever expectations you may have down a notch or three.  Even if you're an established customer of the brothers Reid (William & Jim), aka The Jesus and Mary Chain, remember that sixth generation cassette copy of Psychocandy your friend passed along to you in high school which was later partially chewed up by your tape deck?  Well, the fidelity of that maimed cartridge might actually be actually be preferable to this quite literal bundle of hiss, that in some cases could pass for recordings tracked inside a mine shaft. Per Wikipedia, the Reid Brothers were essentially gifted a Portastudio in 1983, in which they cut several demos (and from the sound of things their teeth as well).  I don't have any specifics on what year these thirteen songs were committed to tape - possibly 1983/84, and in fact some of them appeared with slightly souped up audio refurbishing on the two disc, deluxe reissue of Psychocandy from a few years ago.  Presented here is a more thorough selection of tracks from the Chain's nascent era, featuring early stabs at "Never Understand," It's So Hard," "Inside Me," and "Something's Wrong," all of which were rerecorded for Psychocandy and surrounding singles.  There's two versions of "Upside Down," plus the scarcely heard "On the Wall" and "Up Too High," the latter resembling the sonic aptitude of New Order's earliest rumblings, circa Movement. Even of the audio is sketchy from song to song, this collection of prototypes offers an inside peak to what this band would unleash on an unsuspecting, and ultimately grateful world in 1985. I believe this bootleg was originally offered on the now vanquished Pyrolysebred music blog, so I would like give credit accordingly.

Actually the quality isn't that bad. An interesting insight into the early band. definitely leaning more to pop melody than noise.