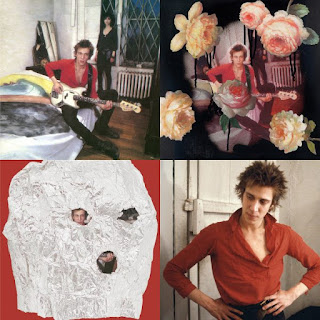 It's difficult to fathom spending five years (presumably anyway) preparing and perfecting one album, and later desperately wanting a do-over, if not a veritable re-recording.  Nonetheless this is the prism through which one Richard Hell (aka Richard Meyers) viewed his second album with The Voidoids, 1982's Destiny Street.  Typically superseded in stature by the band's debut, Blank Generation, regarded as a touchstone salvo in the early canon of punk, Destiny simply wasn't considered a desert island necessity by comparison. It wasn't an album heard blaring out of car stereos in 7-11 parking lots or dormitory windows contemporary to it's Reagan-era launch - and certainly not today.

An alum of early incarnations of coveted proto-punk combos Television, and to a more minimal extent The Heartbreakers (Johnny Thunders' deal, not Tom Petty's) Hell turned out to be his own toughest critic. So much so that in 2008/09 Destiny Street was re-recorded with brand new vocals and guest guitar parts in lieu of the album's master tapes thought to be permanently lost or misplaced.  This version of the album was re-christened Destiny Street Repaired.  Fast forward ten years to 2019, when most of the original 24-track masters were recovered and returned to Richard Hell, and at long last he was able to do the proper remix/remaster he had wanted to for some-odd decades.  All three configurations of Destiny Street and album's worth of demos have been accumulated into handy two disk CD set, Destiny Street Complete, along with a remixed version of Destiny Street on vinyl.  Before we get into the mechanics of all these iterations, here's a quick thirty-thousand foot on where the Voidoids came from and how they carved out a corner for themselves on Destiny Street.

If Richard Hell was to call it a career after his mid-70s stints with Tom Verlaine in Television and his briefer run as a Heartbreaker, his legacy would've largely been cemented right then and there with his name embossed in gold on top.  Even though he didn't stick around to track any officially released recordings with either of these contingents, he did perform with them, and is said to have been part of the construction crew that erected the stage at CBGBs.  Luckily for the world at large Hell was still brimming with creativity and not about to transition to the role of spectator anytime soon.  The original lineup of Hell and the Voidoids was it's most renown, with Hell hooking up with guitarist Robert Quine (1942-2004) a man who found himself in the company of Lou Reed circa the Velvet Underground's late '60s prime and went from there.  Quine's post-Voidoids resume included collaborations with Matthew Sweet, Lloyd Cole, John Zorn, and Lou Reed on his Blue Mask and Legendary Hearts albums. The rhythm section of the Voidoids was filled out by second guitarist Ivan Julian and drummer Marc Bell, with Hell adopting the role of bassist as well as frontman.

Even back in 1976 when the Voidoids debut single, "Another World" on Ork Records, and their considerably more visible first album, Blank Generation in '77 surfaced, Hell & Co may have epitomized punk at that juncture in the genre's infancy, albeit by today's standards not so much.  Lacking the rip-roaring crush of guitars that made the Ramones...well, the Ramones, nor the in your-face angst and histrionics of their UK contemporaries, the Voidoids were nonetheless equal parts attitude and wry romantic inclination, that in their more thoughtful vestiges aimed a wink and the nod to the likes of Jonathan Richman and the Modern Lovers.  Blank Generation spawned two bona fide classics.  First, the title cut could arguably described as an indifference anthem, a veritable slacker screed wherein Hell declares he can quite literally take or leave the auspices of his soon to be bygone scene.  The additionally well-received "Love Comes in Spurts" was even brattier and faster, not to mention sardonic, with some Tom Verlaine-esque guitar antics ricocheting throughout it's New York Dolls-y canvas.  The album as a whole isn't the consistently classic totem it's oft chalked up to be, but sonically all ten numbers composing Blank Generation share concomitant DNA and a discernibly casual gait.

This finally catches up to the belated follow up album I really intended to discuss, Destiny Street (Complete).  I say belated due to the five year layover between it and BG.  You'd think with this reissues' two fairly thorough sets of liner notes by Hell himself (including a reprise of those which appeared in Destiny's initial CD reissue from 1991) there would be a more thorough account for the half-decade lapse, however details are sparse.  He does however mention he begged Sire Records to release him from his contract and reluctance to tour after a brutal three week run opening for the Clash in Britain.  Then there was the matter of making lineup alterations to the Voidoids themselves.  Quine stayed on board, but Ivan and Marc failed to migrate from the original lineup.  Fred Maher filled in Marc Bells stead on percussion, and moreover, the Voidoids added a real asset to the band in guitarist Naux (birthname Juan Maciel).  Naux's pedigree was a bit lean at this point in his career, previously fronting a little known, but often excellent no-wavish tinted combo China Shop, whom I've written up on these pages. Sadly deceased some 27 years later in 2009, Naux wielded a dexterous, artful and challenging acumen, wherein he was effective in the realms of post-punk, funk, and myriad points in between.

The original mix of Destiny Street is suitably enough presented first on disc one. Shortly after it was released in 1982, Hell had serious misgivings about the album as it was presented for public consumption, particularly with the guitar mix.  From a listener and fan's perspective I find nary any fault with Destiny Street's original iteration, but naturally the architect had considerably more invested in it.  As for the songs themselves, Hell states in the more recent set of notes that this was the Voidoids playing "real gone rock and roll, something like I grew up on."  If Blank Generation had a casual temperament, DS was wonderfully and unabashedly loose and rollicking, with Hell & Quine exuding five solid years of wood-shedding and a noticeably advanced aptitude across all tiers.  The proceedings start off with a sheer BANG! in "The Kid With the Replaceable Head," a fevered, high-energy, 145-second surge that out-rocks (or for that matter out-punks) anything the Voidoids previously placed their stamp on.  The song's effect is visceral to a fault, and I'd have to think it might have rubbed off on the Replacements by the time the famed Minneapolis quartet hit their stride in the mid-80s.  "Lowest Common Dominator" is another frenzied romp, "Ignore That Door" plugs into what the Heartbreakers initiated and inserts brief but dizzying guitar solos for good measure.  In terms of outright "catchiness" the prize is awarded to "Downtown at Dawn," a sassy, rhythmically aware banger that sounds like something the Rolling Stones might have misplaced for Tattoo You or Emotional Rescue.  Countering the aforementioned insurgent slammers, is Hell's confessional ballad, "Time," the album's thoughtful comedown that gracefully sidesteps any potential preciousness.  On top of all this, would you believe they made time to wedge in not one, but three covers?  The Kinks' roosty 1965 number "I Gotta Move" and Them's stomping "I Can Only Give You Everything" fit like a glove amidst everything else shakin' on Destiny Street, with the latter culminating in a deliciously shambolic ending. A reading of Dylan's comparatively sober "Going Going Gone" is another mellow respite. And while it's not necessarily an embarrassment, Destiny's concluding title cut is a drivel-y, indulgent narrative with a funky back-beat that nonetheless would have more appropriately served as a b-side.  Thankfully it doesn't undercut any of the otherwise phenomenal material Hell & Co. brought to the table on the Voidoids sophomore (and regrettably final) outing.

The remaining half of Destiny Street Complete's first disk is a largely re-recorded (or Repaired) version of the album from 2009.  The redo was in large part due to the seemingly safe assumption (at the time anyway) that the master tapes had hopelessly disappeared, rendering a proper remix of Destiny to Hell's satisfaction an impossibility.  With Quine having passed away in 2004, and more recently mach-two Voidoids guitarist Naux, Hell decided to recut his vocals and bring aboard some several guest guitarists.  They include original Voidoid Ivan Julian, and additionally Marc Ribot, and Bill Frisell. A backup of the original rhythm section tracks were luckily preserved in Richard Hell's personal archive.  The Repaired incarnation of Destiny Street maintains the aesthetic of the original artifact with Hell's vocal parlance virtually unchanged, and the guitars more lucid in the mix, but not quite as biting as the more familiar takes.  In short, it's an interesting but not necessarily crucial update...perhaps with the exception of the primary architect's sanity and perfectionism.  As mentioned above, in 2019, the bulk of Destiny Street's original master tapes were recovered in a storage space, and on disk two of DSC, Hell finally gets his wish for the proper remaster he has been pining over for decades.  To my ears it doesn't futz with the original mix much at all.  As remasters usually go, Destiny Street's modest 2019 refurbishing is a tad clearer and more lucid.  Most notably, the volume is thankfully not pushed into the red, as remasters so often do more harm than good.

The lengthier half of disk two rounds up an additional twelve tunes, predominantly demos of several album tracks, an ep's worth of worthy outtakes (e.g. "Funhunt" and "Crack of Dawn") and material from a pair of surrounding singles.  All interesting inclusions, but not crucial for the appreciation of the main course. Whether your a die hard acolyte of Hell and/or the Voidoids from the original inception of punk or a newcomer every version, variation and alternation of Destiny Street is now available at your fingertips direct from Omnivore Records as digital downloads or a well present two CD set.  Amazon has you covered too, and don't forget the stand alone vinyl LP variant of the 2019 remastered version of the album.

Excellent summation, thanks.
There is one creepy / jarring moment that no-one seems to mention: "The Plan" on 'Blank Generation', a jaunty and very catchy paen to incest. WTF?!

A very thoughtful and well-written critique. "Destiny Street Repaired" was a devil's bargain: in order to achieve the mix he wanted, Hell sacrificed great performances by Quine and Naux. I think he wanted to "repair" Destiny Street because he was proud of his lyrics and wanted them to be heard over the guitars.

As you mentioned, the album contains three terrific covers, and "Kid With The Replaceable Head" had already appeared as a single. So there are only six new originals. Richard has written that he using heroin heavily at the time, and that when Quine would call him from the studio, Hell would tell Quine to add more guitar tracks.

I guess I think more highly of the title track than you do; it's based on the intriguing premise of meeting your younger self. What would you do? Hell's answer: "I loved myself. I took me home."

Nice.
You can also grab it free from Omnivore's Noisetrade page: https://www.pastemagazine.com/noisetrade/music/omnivorerecordings/richard-hell-and-the-voidoids

Thanks for your observations folks. No, Charles, I never noticed of the connotations you mentioned in "The Plan." Damn, looks like I need a better set of ears. I guess I have a way of selectively ignoring potentially egregious lyrics in catchy tunes.

I sort of got the gist of "Destiny Street" (the song) but just didn't latch onto it like I did the rest of the album. Something that unique would have been better served on a single IMO.