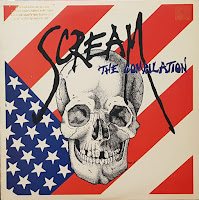 So yeah, there was a time when major labels (in this case Geffen) would not only take a chance on (relatively) unknown quantities but even compile a good ten of 'em on one LP, no less.  Scream (The Compilation) is fairly common, though it never made it into the digital era.  The basis of this record was to expose the world at large to a handful of Southern-Cali hopefuls who frequently played a mixed-media, multi-stage venue in Los Angeles, Scream.  The club, which was said to be a melange of live music, art installations and even intermittent freak shows sounds like the subject of a fascinating documentary, and while this record would surely serve as the soundtrack, it ironically consists entirely of studio material.  But that's fine, given that live cuts from fresh and/or arcane acts aren't always the most ideal way to introduce unknown talent to virgin ears.

Scream... kicks off on an ambitious note with a band that already garnered a growing profile, and would soon be known to the universe in a couple more years. I opted not to go with the proper spelling of this quartet, nor the song title to keep the higher ups at bay, but the version here differs from the one that made onto their renown sophomore LP.  Caterwaul and The Abecedarians specialized in dazzling guitar-laden post-punk, the latter of whom I eventually became a serious follower of.  The Delta Rebels, souped-up bluesy hard rock was a sheer kick in the ass, while the similarly minded Hangmen kicked up a ballsy cloud of dust of their own, channeling a hint of southern rock in the process. At this stage in their tenure TSOL (True Sounds of Liberty) had more of a jones for metal than punk, and it comes across in Jack Grisham's wanky and somewhat contrived vocal affectations on their spin of Hendrix's "All Along the Watchtower." And although the audio may be a bit bumpy on my rip of the Kommunity FK track that concludes this record, it's a smashingly stimulating four minutes of modern rock bliss. Immensely recommended.

THIS brings back memories! I moved to Los Angeles in 1987 to break into working in the music business(record label, not performance side). I arrived and started working on TV and films until I got my first gig. In the meantime, I arrived into the second stage of hair bands breaking through(there would be a few more phases in the coming years)...so as any good aspirant A&R man would do, I hit the clubs, met musicians, talked to fans and tried to get the band I was managing at the time some gigs at Scream(we landed one in '88).

Scream was...a real freakin' SCENE. Nothing like it I've ever seen then or since. It was short-lived, pretty much over by '89 but in '87/'88. Pretty electric(sic). The bands were mostly pretty half-assed, not particularly good writers in them, musicianship was passable(at best), 'the look', shallow hollow-outs of whoever the artists thought would get them a record deal and was hot that month....sounds lame, right?

Uh, NOT. There was a hunger, ambition and belief in the powers of rock 'n roll not just to get laid but live out each members' dreams of....well, whatever they were dreaming. And the fans? The scene in Hollywood in 1987 was every bit as much about 'the fans' as it was the bands. (and for dudes, those ladies just did not wear an awful lot...crazy, man.)

Seeing this album here brings back memories I've not thought about in 30 years...and reminds me of, even though the hair band scene was not my own, I engaged and lived a fun, fun part of it at the corners. Thanks for bringing and brushing off the cobwebs of this one....

Damn. If I only could have those memories (or some resembling them) myself. Strangely enough Bruce, I lived in a southern-Cali desert town (Saugus) between 1981-81. I was a mere seven, and of course I had no idea about what was EXPLODING in L.A. just an hour south of the grass-less suburbia I was ensconced in. Truthfully, even if I did have a faint awareness of Black Flag, Germs, etc, as a first grader I doubt I would have been bitten. Sometimes when I tell people about this era of my history I jokingly relate Exene Cervenka was my babysitter.

I forgot to mention in my piece that Scream must have seemed like an isle of refuge for those seeking an antidote to all of the pop/hair-metal that was absorbing so much smoggy oxygen in that corner of the world, but as you said not all of the bands that played there were the creme de la creme. Thanks for your thoughts. Hopefully pictures of this venue will surface at some point, but I haven't found any so far.

It's probably a minor point, but I think Jack Grisham was out of TSOL by this point and Joe Wood was fronting them. He sang on most of the metal/cock rock stuff that they put out.