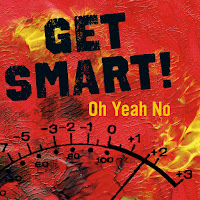 They say the squeakiest wheel gets the oil.  In the mid-80s, in large part thanks to MTV, it was pretty easy to discern who was besotted with the proverbial grease, not to mention plump bank accounts.  Born and bred in Lawrence, KS, Get Smart! were short term fixtures on the college radio circuit, beginning with their initial release, 1981's Words Move ep.  It wasn't much longer until they garnered more attention with their debut LP in '84, Action Reaction, but just as even greater visibility took shape with their follow-up two years later via Swimming With Sharks on Restless Records, things very gradually creaked to a halt by the late '80s, save for a couple of stray 1990 gigs.  Get Smart's! indie-rock casualty story was one that was repeated virtually hundreds of times over during their era, but in their case this relatively plain-clothed and unsuspecting co-ed trio coupled their organic aesthetics with an edgy and often urgent incisiveness that most of their contemporaries (let alone mainstream titans like INXS, and so forth) could ever hope to tap into.  In 1987 plans for a third album were formally set into motion.  Half a dozen songs were cut with the late, great engineer Iain Burgess...and until 2021 were promptly put to pasture.

In 2020 Get Smart! reemerged after a 30-year slumber, at an inconvenient time to say the least. While performing may be out of the question as far as the near-future goes, the band was able to tout one accomplishment last year, if only to put a nightcap on those heretofore abandoned 1987 recordings. So far as I know those original six songs weren't supplemented with any new ones, however Steve Albini was brought aboard to mix them for release. They're finally seeing the light of day in the guise of the band's "new" ep, Oh Yeah No, courtesy of Capitol Punishment.  Not straying far from where they left off with 1986's Swimming With Sharks, GS!'s key ingredients were not only firmly intact, but in full swing with Marcus Koch and Lisa Wertman Crowe's trading off on vocals (often times one being more dominant) with an overlay of serrated and nervy guitar textures that should sit right at home with aficionados of everyone from Pylon to The Embarrassment.  Yes, there's a post-punk context permeating much of this disc, but not so overbearing as to encroach on the band's tuneful, minor-chord constructs.  The Crowe-led "Under the Rug" and "Painted Floor" are two of Oh Yeah's... most effective moments, but moreover the searing finale "Paradise" could pass for the most potent tune X left off See How We Are.  Seems almost criminal that GS! left these nuggets languishing on the shelf for over three decades, but better late than never.  Had Oh Yeah No eventually expanded into a full fledged LP in say 1987/88, it just might have outstripped their past glories, which were nothing to sneeze at.  And now you can partake in Get Smart! old and new over at Bandcamp where CDs of this ep are available, alongside virtual editions of the cornerstones of their back catalog.  Many happy returns, with fingers crossed that some live dates will ensue when the world becomes a bit less contagious. 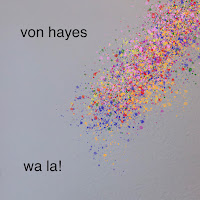 Even more marked of a non-household name is Philly's current Von Hayes, who like the aforementioned also boast a defiant, indie aptitude.  Who would have thought all the way back in the late-80s (and even into the early Clinton era) that Dayton, OH's once struggling Guided By Voices would cast such a wide influence on so many protege acts to diligently follow in their footsteps?  Numerous aggregations have drawn parallel lines on a not-so-slow decline with Robert Pollard and Co. over the years, including Car Seat Headrest, the Capstan Shafts and the even less heralded Von Hayes. To know Von Hayes is to know lo-fi dabbler Graham Repulski, who was once a component of their lineup...and potentially still is.

The band are said to have worked with Repulski on their latest missive, Wa La!, but his name appears nowhere in the credits.  Regardless of the extent of his involvement, Repulski's fingerprints (and presumably his Tascam 4-track) are living all over Wa La!'s dozen, basement-dwelling numbers.  Von Hayes officially credited duo of Drew and Peter exude/exhume the charm of '90s era GBV, as if Do the Collapse and the ceaseless spigot of post reunion albums never happened.  It's all here - the closet vocals, rough-hewn instrumentation, mystique-laden prose, and most crucially a poignant semblance of melody.  Whether it's the consoling, bittersweet hues of "Sly Gravy" and "I Had No Idea It Was Today" or the more extroverted and ambitious "Quarantine Dreams" (gee, what might have inspired that title?) not to mention plenty of moods and modes in between, Wa La! can't help give one the impression that VH are here to plug a gap - and sprinkle it with their own little somethin' somethin' to boot.  Truthfully, we shouldn't give GBV all the credit here, with touchstones like Daniel Johnston, and to a lesser extent Lou Barlow also informing this combo's humble but wryly soaked ethic.  Wa La! is available physically and digitally now along with a spate of accompanying Von Hayes recordings on Bandcamp, and while you're at it, pay a little visit to Mr. Repulski as well.

GET SMART A REALLY FINE BAND !!
I own the two lps.
Josef

Wow, I had no idea these Get Smart recordings were now available. Kind of fitting that Steve Albini would finish what the late Iain Burgess started. Thank you for the good news - we need all the good news we can get these days!

Thank you for this post! I love Get Smart and I might have never known about this EP otherwise.