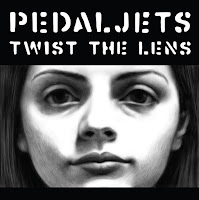 Five decades is a long time to be playing the rock and roll game.  Yes, technically that's how long the Pedaljets career has spanned...if you count the 2020's and almost two full decades of inactivity between the early 90s stretching well into the 'aughts.  And for what it's worth we've been on their tail since 2007 when I shared tracks from their phenomenal 1988 debut, Today, Today.

Gestating in Kansas all the way back to 1984, the 'jets brand of serrated guitar-jangle was a tangy and sometimes insular approximation of contemporary icons REM and the Replacements.  If not wholly groundbreaking, there was a subtle mystique at play making Today, Today, and a well circulated demo tape from a couple years prior, staples among the few thousand fans who were lucky enough to have made their acquaintance.  Fast forward a couple years to the band self-titled second album, which brought a leaner and sturdier Pedaljets to the fore.  Perhaps not as distinctive as their debut, 1990's Pedaljets exuded some discernible muscularity and tighter songs.  Not satisfied with the original mix of that record the album underwent a significant re-calibration and reissue in 2008.  Coincidentally or not, right around the same time the Pedaljets started to play gigs on their own home turf again, and in 2013 their belated third album, What's In Between surfaced.

If fans thought they were lucking out with a reunion record seven years ago, how about an even better and more consistent follow-up to that?  Amazingly, still boasting their original core lineup of leadman/guitarist Mike Allmayer, bass twiddler Matt Kesler and drummer Rob Morrow The Pedaljets have not only defied the longevity odds but have returned with what is arguably the best disc they've put their namesake on in over thirty years. The freshly minted Twist the Lens is not a throwback to their college rock days of yore, but a bold assertion of where their creative impetus has been residing in the here and now.  Things start off with a veritable bang on vigorous opener "Disassociation Blues," a taught, infectious riff rocker.  This formula is repeated to even greater effect on "Loved a Stone," "One Away," and Lens' punky closer, "The Fader."  Nonetheless, this album isn't all pent-up aggression mind you.  Things are tempered considerably on mid-tempo keepers "Placid City Girl" and "Uncounted Heads," suggesting an absorption of '90s Wilco and the like, and the Jets even pitch us a couple of bona fide ballads in the guise of "Sleepy Girl" and the melancholia-laced "What Only Cats Chase."  In fact, there isn't one iota of triteness or cliched maneuver in sight on Twist the Lens, a remarkable feat for any band of veteran status.  You can hear the results for yourself at Amazon downloads, or buy a CD or album (blood red vinyl, kids) straight from the band.
Posted by spavid at 12:23 PM

This is good... kind of Television meets Tom Petty.