Game Theory - Across The Barrier Of Sound: PostScript (2020, Omnivore) - A brief review. 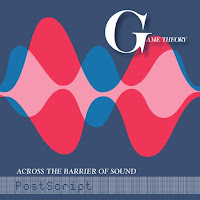 As Dan Vallor's liner notes in Across the Barrier... smartly advise, to regard this sprawling 24-song collection as a "lost" Game Theory album is deceptive and inaccurate at best.  By 1989 and '90, which is when most of these recordings originate from, G/T as most fans had known them was a thing of the past, given the departure of guitarist Donnette Thayer, and other bandmates whose tenure was less established than hers.  In terms of veteran members, G/T were slimmed down to a duo of frontman/prime mover Scott Miller, and Gil Ray, the group's erstwhile drummer who by this point ceded his kit in favor of guitar (both passed away in 2013 and 2017 respectively).  This final incarnation of the group settled upon a quartet with Miller recruiting The Three O'Clock's (and interestingly enough, former Game Theory producer) Michael Quercio to handle bass and accompanying vocals.  Also aboard was Thin White Rope/True West expat Jozef Becker on percussion, who incidentally played in Scott's pre-G/T combo Alternate Learning.

You might say the only hindrance of this lineup really pursuing a sixth proper Game Theory record was quite literally the tyranny of distance with Scott and Ray continuing to reside in their established stead of the Bay Area, and Michael and Jozef's reluctance to relocate from the L.A. area  Ultimately, this version of G/T existed primarily as a live entity, with a touring regimen that skewed almost entirely to California circa 1990, but Scott was chockablock with song ideas for a prospective record...and to our good fortune demos of which were committed to tape, comprising a large portion of Across...  Many of the songs, while not fully realized in the studio with the newly constituted Game Theory appeared in finished form on Plants and Birds and Rocks and Things, the debut album from Scott's spinoff band The Loud Family in 1993.

The 25-song Across The Barrier Of Sound: PostScript is if anything else a bit scattershot, presentation-wise anyway, with a good ten songs relegated as "bonus tracks," which is a bit confusing for a mock-up of an album that was never conceived in any tangible form to begin with.  You might say the Script quotient of the title is wholly appropriate since none of these songs made it to full fruition under the guise of Game Theory.  While I'll get into the specifics of some of the tracks in a moment, the overarching tenor of the material here is more akin to G/Ts idiosyncratic double LP Lolita Nation than it's follow-up, the relatively linear, 2 Steps From the Middle Ages.  But more discernibly, the bulk of what's here are Scott's lo-fi home recordings, stripped of of G/T's traditionally robust arrangements, often times just pared down to vocals and guitars.  Listening to his "solo" traipses is not unlike witnessing the intermediate construction phase of a home - a relatively sturdy foundation had been poured and the frame was undeniably taking shape - but Miller was nowhere close to breaking out the paint cans, or even driving the last nail into the roof.

That being said, there's a bundle of sheer jewels in the gestation phase to enjoy here - "Laurel Canyon," "Treat It Like My Own" and "the Come On," all possessed The earmarks of classic Game Theory and would have made pristine additions to the band's storied catalog.  Furthermore, there's a bevy of prototypes that eventually made the migration to that aforementioned first Loud Family record - full band recorded versions (plus supplemental acoustic demos) of "Inverness" and "Idiot Son," alongside homegrown takes of "The Second Grade Applauds," "Even You," and the phenomenal "Go Back To Sleep Little Susie (Aerodeliria)."  And there's covers, even!  Eno's "Needle in the Camel's Eye," a semi-acapella reading of the Beatles "All My Loving," and Rundgren's "Forget All About it" receive the bedroom treatment, and even more riveting a radio session take of Big Star's "Back of a Car" from 1989 that's been making the rounds among Game Theory bootleg aficionados for ages.  Michael Quercio gets some time on the mic as well via "Water," initially appearing on a G/T fan club cassette release, and a home recording of the Three O'Clock's 1983-era "A Day in Erotica."

Again, I don't fully grasp the rationale for why some of the bonus cuts weren't included amidst the main course (and vice versa), but that contention aside, Across The Barrier Of Sound: PostScript is manna for Game Theory fans still holding out for wholly unique and unreleased Scott Miller tunes.  A bit of a hodgepodge?  Sure.  Moreover, couldn't half of this album been alternately categorized as Loud Family demos, and set aside for say, a Record Store Day release?   It's hard to argue not, but in the grand scheme of things we're blessed to have this embarrassment of riches at our disposal - and to get a glimpse of where Game Theory might have been headed had circumstances played out a little differently.

It's available now on CD or double LP vinyl straight from Omnivore.  Itunes and Amazon will take care of your digitally as well.
Posted by spavid at 7:59 PM

"the departure of guitarist Donnette Thayer, and other bandmates whose tenure was less established than hers." ?
Donnette had played on Lolita Nation & 2-Steps From The Middle Ages LPs; Shelley LaFreniere had played keyboards on both of those, as well as the earlier Big Shot Chronicles LP - hardly "less established"..

After leaving this comment, I will be hurrying over to my music file player to give this one another listen!

Extraordinarily well-written, informative, and I can't wait to hear the album. Also, how often do you see chockablock in pop reviews?

You should also mention that the CD has a "hidden" track from Alternate Learning.

Why would anyone want material to be relegated to harder-to-find, overpriced RSD specials?

I applaud Omnivore's decision to make this stuff generally available and not artificially scarce.

Thanks for your comments and observations. Elizabeth, I thought I'd keep the hidden track a secret...just because. Maybe I should have mentioned. I dunno.