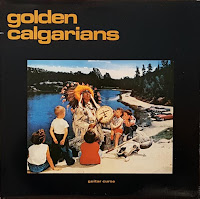 It should come as no surprise that a band named the Golden Calgarians hailed from Calgary, Alberta. With that near-obvious fact out of the way, this appears to be one of the quartet's final releases, preceded by two full lengths I have yet to hear a note of.  Said to have gigged with the likes of D.O.A. and the Diodes way back when, G/C weren't full throttle punk, albeit not terribly removed from it either.  The gents bore a sardonic edge, that thankfully didn't supersede their overarching shtick.  The lead-off title cut packs the same kind of wily edge and slicing guitarwork their contemporaries the Screaming Blue Messiahs had a penchant for, while the chiming "Summer of '87" is more attuned to my sensibilities. On the back sleeve the Calgarians give a shout out to the Sioux Indians "for keeping the spirit of rock alive."  Not sure how they came to that realization, but who are we to argue?  Four songs total, one's just right for you.

Hello from Calgary, great to see this on your blog. More Golden Calgarians (including the notorious ode to a local fast food joint, "Chicken On The Way") at the Calgary Cassette Preservation Society: http://www.calgarycassettes.org/search?q=golden+calgarians

Hi Arlf. When I was looking these guys up I stumbled on the Calgary Cassette site. Cool stuff.