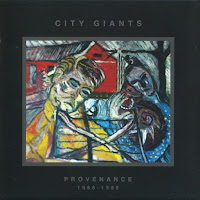 Sorry for another "drought" folks.  Haven't had much time to digitize lately, so I went with one of the dwindling out-of-print CDs left in my collection that isn't available from the usual sources. As was the situation with last weeks post of Quinn the Eskimo, City Giants were another UK cold case from a particularly golden era in the British isles indie pop scene.

With a shelf-life spanning merely a year and a half, C/G were composed of four North Wales to London transplants whose discography prior to this anthology CD was a 1987 7" ep (represented here on tracks 3-5).  Seemingly inspired by early Aztec Camera, and to a lesser extent The Smiths, the Giants belied their larger than life moniker with a considerably modest sonic aptitude, not far removed from contemporaries The June Brides and Bodines.  Like the aforementioned there's a preciousness to their music, but these gents stopped just short of any overt twee transgressions.  Of the fourteen studio cuts here you'll find little that is brash or overpowering, and while Provenance isn't uniformly revelatory it is consistently satisfying.  Two selections in particular stick out as comparatively polished, "Stay Heartbroken" and "Forgiveness" recorded during the band's waning days in '88, and pointed to some serious commercial ambitions had they stuck it out a little longer.  Guitarist Paul Davies published  a a book in 2014, not so much about music, though there is a brief detour where he discusses the band.  Unfortunately, this reissue was almost as limited as the band's now collectible single, and it took some time before I came across a reasonably priced copy, but as usual, I digress.  Dig in.

Hi, can we have this in FLAC. Thanks