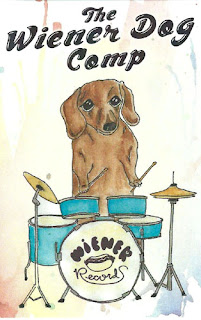 Alright, I practically had to take a day off from work to lasso this one all together.  Per above, 71 tunes, three hours of content spread across two packed cassettes, and limited to a mere 500 copies.  Between digitizing, separating tracks, scanning artwork and the rest of it this took up a good six hours or so of my time.  I hope it was worth the effort, but in hindsight what's on here may be of limited appeal.  You can chalk that up to the Wiener Dog Comp's relative lack of star-power, or it the very least, a roster of veritable unknowns.

The backstory to this one is pretty simple - a benefit album to cover the expenses of a dachshund's large (and evidently lifesaving) veterinary bill.  Burger Records was a relatively fresh indie imprint at the time (and now something of a fixture).  The idea was to get every band on the label (and beyond) to contribute an exclusive song, making it an extra enticing label "sampler" as it were.  To my knowledge a few songs carried over to subsequent releases by a handful of contributors (Paul Collins and Cleaners From Venus come to mind), but otherwise this material is unique to these tapes, and was never made available digitally.  An L.A. area label (and physical store as well if I'm not mistaken), Burger has a discernible penchant for indie rock of all stripes including punk, garage, psych, and lo-fi.  Over the years they've earned a reputation as ear-to-the-ground taste-makers to boot, and even if they never garner a reputation as lofty as Sub Pop or 4AD, pretty much any act with the Burger Records logo emblazoned on their record is guaranteed a modicum of respect. 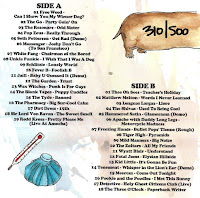 And what of the bands that occupy these lengthy reels?  Most I can't impart very much about, but there are a bunch that caught my eye upon seeing their name on the roster: Pop Zeus, The Resonars, Tenement, Gap Dream and more notably Redd Kross and the Three O'clock, both of whom contribute live covers.  Of the more established acts, Thee Oh Sees, The Tyde, King Tuff, and Paul Collins (of Paul Collins Beat fame) all show up and make it count.  You'll find some pleasant surprises along the journey as well.  I was introduced to the likes of the succulent Frausdots, Nightmare Boyzzz, and the Blank Tapes and regard myself as all the better for it.  Finally, I'd be remiss if I failed to point out Dirt Dress' sterling mid-fi spin on Wire's 154-era classic "The 15th." 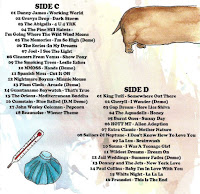 Click on the images to your left and above right for complete tracklists (though bear in mind the last two songs on side D are errantly printed in reverse order).  If you dig what you hear, you can also check out Burger Record's similarly themed Kitty Comp from the same year right here.

I for one appreciate the time you spent on this. Listening to it now, and the Three O'Clock's cover of "Paperback Writer" is HOT! Thank you. Hope the weiner dog is alive and well.