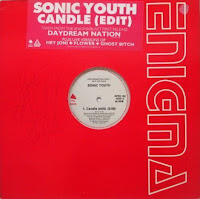 Much ado has been made of Sonic Youth's 1988 double album Daydream Nation - and virtually every scrap of praise and critique has been true.  This week marked the thirtieth anniversary of it's release, sparking many a commemoration in social media.

Daydream Nation was my introduction to Sonic Youth.  Both the video for "Teenage Riot" on 120 Minutes, and it's 'album of the year' designation on at least a dozen critics polls (including the coveted Village Voice Pazz and Jop poll) was all that it took to usher me into a store to purchase a cassette copy.  Despite the sweet, near-melodic charms of "Teenage..." much of the remainder of Daydream was an acquired taste.  By and large it didn't take long to incubate with me.  Acclimating to Thurston Moore's and Lee Renaldo's intricate latticeworks of feedback, ear-shattering dissonance, and con-caved sonic motifs was a right of passage for folks like myself back then, much to the chagrin of my parents, not to mention schoolmates who were still clinging to their Whitesnake albums.  One soon realized that the the insertion of Daydream Nation into their music collection upped it's "cool" ante exponentially whether it be on a record shelf, CD rack, or in my case a shoebox full of tapes.  Sonic Youth never made an album like it before or since.  Wisely, they didn't even try.  Daydream Nation resides on it's own metaphorical plateau you could say.

I'm not at liberty to share the whole album, but I can at least let you have this promo ep, featuring an edited version of one of  Daydream's more approachable songs, "Candle," along with a trio of live cuts and a conclusion that I can only categorize as miscellaneous.