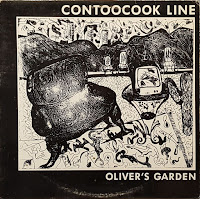 Would you believe another blog got to this one a good fifteen years before I did?  For starters they didn't share the whole record, but they did disclose a kernel of info that would have been lost on me otherwise.  Contoocook Line contained in their humble four-piece lineup future Pavement drummer Steve West, who for some unspecified reason goes by the moniker of Jonah West here.  Hmmm. Anyway, C/L hardly sounded like a logical precursor to Stephen Malkmus' soon-to-be hallowed slack attack.  As the piece on Vinyl Mine notes, Contoocook had more in common with REM (think, Life's Rich Pageant but with less zest) at least on some of Oliver's Garden's livelier cuts.  The chaotic album sleeve, not to mention intermittently rambunctious song titles, belie a fairly garden variety, DIY college rock record with too many sleepy (and even folky) underpinnings for it's own good.  Fortunately, OG awakens from it's slumber for a handful of peppier respites like "Western Sizzlin'" and "Same Ol', Same Ol'" which should still encourage an abundant number of you to tune in.  As for the concluding acoustic ballad, "Go to Hell," the sentiments expressed within are sadly as true today as they were in the Reagan-era.

this album is good. don't beat it up too much. sister time is my favorite. thanks for giving these guys the cred they deserve.