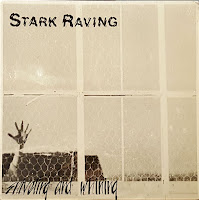 Stark Raving were a Connecticut export whose lone record, Sniveling and Whining came courtesy of Incas Records, one of my favorite indie imprints of the '80s.  Thing is, this fast(ish) and loose co-ed punk trio would have been a more suitable fit for SST, particularly among that label's stable of second-tier acts.  They're a bit on the ramshackle end of the spectrum, and their charm begins and ends there.  Sniveling and Whining produces the occasional gnarly tune, like "Too Much to Take" and the relatively ambitious "New Highways," which vaguely resembles what X were attempting around the same time.

Any chance you might post a new link? This one has expired. Thanks for your fine work on this great blog.