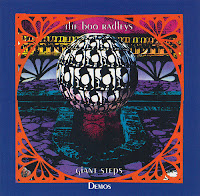 As some of you may have surmised, I'm big on demos, if only for the fact that songs in their raw gestation period bear a certain spontaneity that doesn't often translate in the often over-labored finished version.  This collection of prototypes for the third Boo Radleys' platter Giant Steps does indeed convey said spontaneity and unpolished facets galore - but that doesn't necessarily mean they supersede the more well known prime-time iterations.  In fact, I favor the official recordings over the working versions I'm presenting here.  You see, these are true blue demos - merely unfinished silhouettes and outlines that were designed to be used as a reference point for Sice and Co.'s professional studio endeavors in 1993.  There's a lack of preciseness and finality to these recordings - more like, "let's lay 'em down quick on tape before we forget the gist of the tune(s), boys."

The Rad's never had anything approaching a hit Stateside but in their native England, Giant Steps was their breakthrough and a veritable creative triumph which found the quartet making great strides in terms of inducing a solid dose of empathy into their handiwork, while simultaneously shying away from the dream-pop inclinations that was formally one of their most renown calling cards.  This is one of those situations where it really does benefit the listener to be acquainted with the finished album to appreciate these nascent and often unrepresentative early takes, so if you're fresh to Giant Steps, check it on Spotify or otherwise before delving too deep into this.  My only legit complaint with the demos is that we're deprived of the genesis of one of the record's pinnacle moments, "Best Lose the Fear."

Many thanks for this!

"Giant Steps" is an amazing album. I discovered it (and the Boo Radleys in general) in the late 90s. Thanks for this! Looking forward to giving it a listen.

Awesome! I love the Boo's and love this record, and I love demos too!

As a longtime fan, I'm amazed that I've never heard of these demos before -- where did you get them??? At any rate, thanks for sharing. This will be a very interesting listen!

the link has expired and doesnt work, can you please reupload this? :( Please please!!

the link has expired can u reupload this please?