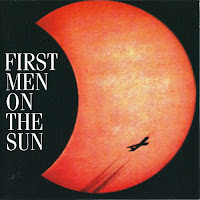 Established in the mid-80s, an L.A three piece dubbed the Abecedarians created a stir for ear-to-the-ground types who fancied mystique-laden post punk with temperate psychedelic inclinations, not unlike local contemporaries Red Temple Spirits and Psi-Com.  The band brewed a dreamy, disciplined alchemy on such arcane slabs of wax as Eureka and Resin.  While the Abecedarians handiwork was nothing less than satisfactory, the only drawback to their records was the potential of them to lull you to sleep if you were say, behind the wheel on a lengthy, straightaway road or highway.  By the Clinton-era two thirds of the group, Chris Manecke and John Blake reconfigured their trippy, atmospheric aplomb into a decidedly linear indie-rock slant for First Men on the Sun's one-off 1995 album.   "Alternative" bandwagon jumping was hardly an option however, rather Manecke and Blake's intent was considerably more substantive.  Sonically, there's not much that you could term as wildly innovative here, but I'm honing in on traces of Love Battery, Rein Sanction, and to a lesser extent Screaming Trees.  These comparisons are likely more coincidental than anything, but just wanted to offer a measuring stick.  A solid record, and best of all, firsthand familiarity with Abecedarians isn't a prerequisite (but doesn't hurt either).